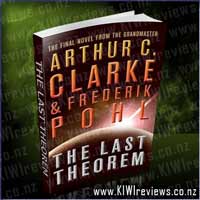 They detected the flash of the first nuclear tests on Earth far out in deep space. Now, powerful intelligences far greater than our own - the Grand Galactics - have assembled a vast invasion fleet to fly to our planet and exterminate every living thing.

Meanwhile, Ranjit Subramanian, a young Sri Lankan astronomy student has become obsessed with a three-hundred-year-old mathematics problem. Determined to solve it better and faster than anyone else, his rise to fame draws him into the clutches of a secret weapons project code-named "Silent Thunder".

On the eve of the invasion, with China, America and Soviet Europe in a battle for final supremacy, Ranjit's daughter is taken by alien observers. Now he is all that stands between survival of not only his own family, but the entire human race, and certain doom.

Since early childhood I have loved Arthur C. Clarke's works. I recall being captivated by the big-screen presentation of '2001' and later, '2010', and recall the day my passion for science was kindled by the discovery that this sci-fi author was the brains behind orbiting satellite systems... something our world could not survive without now.

Frederik Pohl, now nearing 90 years of age, has also been one of my favoured sci-fi authors for most of my life, and I have enjoyed many of his tales during the colder nights reading under the bedcovers with a torch while my parents slept unawares while I walked on alien planets, fought pitched battles in space, and greeting strange new civilisations across time. So it was with some joy and anticipation I spotted this amazing collaboration on the bookshelves.

The book starts off well enough, with much 'human drama' in the spotlight, but soon introduces us to the alien mentalities who are fated to seal our demise... and shortly after that the story starts to go a bit... limp. Not only are there strange jumps in space, but there is a distinct feeling of massive contradictions in time. Either that, or some key plot elements are just not being stated, only weakly implied. I was astounded at the level of disappointment I felt as I read this book by two giants, who have combined their mighty literary tools to make something that, alas, came across as quite flacid in many regards.

Sure, the characters are deep and are explored in great detail, but the key plot elements, the alien entities, are touched on in a strangely peripheral way, as though superior dark-energy entities reshaping the universe, a race of armoured warmongers, invisible spies and cybernetic starship pilots were merely casual plot devices of no real relevance. To add to the torment, the ending left me particularly unsatisfied, with an abrupt termination and the feeling that the final chapter or three were tacked on in a rushed haste to avoid missing publication deadline.

Overall, though individually these authors helped shape the landscape of sci-fi over the last half century and are (or were) thus two of the most influential writers, combined, their efforts fell somewhat short of expectations and left me wondering if this is really the legacy for Clarke I would want to remember. The answer, after much thought, is a definative "No!" I will always hold Clarke's "Rama" series in my head as his crowning glory. This one left my memories of Clarke a little soured.

And indeed, he's right, he's not a worm. So what is he? And is it a good thing to be? Scott Tulloch has created a hilarious dialogue between an unlikely pair, culminating in a dramatic twist at the end.