« The Bad Guys Episode 3: The Furball Strikes Back review 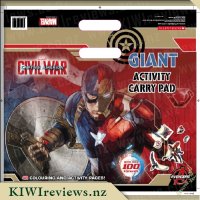 It's hero against hero as Captain America, the First Avenger, faces off against the Invincible Iron Man.

Grab your coloured pencils and join Hawkeye, Black Widow, Ant-Man, Falcon and Blank Panther as they choose a side in this epic clash!

Whose team are you on? Join Captain America in this giant activity carry pad to help save the world from evil.

My boys are huge fans of all things to do with Super Heroes! Captain America is my four year old,s absolute favourite and my eight year old is easily swayed between the variety! I like that this has a handle for them to carry and Mr 4 thoroughly enjoyed this feature pretending he was off to work!

This is advertised as an Activity Pad and it does feature some activities but is mostly dominated by colouring pages. My boys both enjoyed the included sticker activities the most. The activities include crosswords, spot the difference and mazes. Mr 8 had no problems completing the activities and Mr 4 was more than happy to assist with his pen at the ready. Mr 8 said he would prefer if it could fit in his bag and Mr 4 was far more impressed that it was a "giant drawing book"

There is a mixture of colouring pages, basic and more detailed which I thought was great as my boys can colour at different levels. I also liked that each activity had easy to read and easy to understand instructions on how to complete them. Mr 8 did not require any help but of course the activities were a bit advanced for my four year old. Over all I think this is a great novelty, perfect for school holidays, hospital stays or rainy days! Mr Six and Miss Four were both delighted when they saw this puzzle pad arrive. They took turns trying out the carry handle, and Mr Six was so impressed he decided he would write his own review for the product as well! The stickers were admired too. Mr Six found that the entire page of stickers could be detached from the book so that he could look at them while he decided which page they should go on.

There was a range of different activities, most of which Mr Six could manage without assistance, but Miss Four needed some help. Her preferred pages were the colouring-in sections whereas Mr Six liked the puzzles. The pages were big enough for them to both work on at the same time - when the book was opened flat the pages faced in different directions, which was really good for two children and prevented some arguments.

I thought the size could be an issue insofar as it could be rather unwieldy for a small child to carry. Miss Four in particular was struggling to carry it through a doorway without bumping it. I also envisage problems fitting it on to a small shelf or in a drawer for storage. However, the children loved it and they certainly did not damage it when they were playing with it (unless you count the sticky fingerprint left on the back cover by a rather enthusiastic Mr Six)!

I would have liked a bigger range of activities which would be appropriate for children of different ages. I felt that a lot of the activities were a bit too easy for Mr Six, although no doubt Miss Four, who loves colouring in, will have a lot of fun with it. The pictures are big which means there are no tiny fiddly bits for her to negotiate, and her large crayons make light work of filling in a big area of colour. Stickers, of course, are always a selling point - both children love attaching pictures to their work and decorating it so that it looks more attractive.

It is always hard to tell with products of this type whether or not they are going to be suitable for a particular age group. Personally I would not have chosen it, but, as is often the case, I have to revise my opinion and remember that the book was not created for me - it was meant for young children, and their tastes are often quite different to those of an adult. I am happy to see two such delighted children!

In our future worlds the Administration rules the Sphere of Humankind, the Games Board sanctions and funds wars and conflicts, and the Haulers' Collective roams the space routes like the caravanners of old.

Marko and his crew of fellow soldier-engineers are sent to investigate a largely unknown planet. When they encounter strange artefacts and an intelligent but aggressive squid species, they are forced to embark on a perilous ... more...