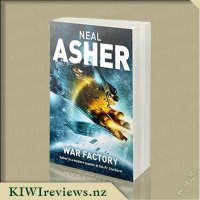 One seeks judgement, another faces damnation and one man will have his revenge...

Thorvald Spear is losing his mind as he drowns in dark memories that aren't his own. Penny Royal, rogue artificial intelligence, has linked Spear with the stored personalities of those it's murdered. And whether the AI seeks redemption or has some more sinister motive, Spear needs to destroy it. He feels the anger of the dead and shares their pain. As Spear tracks the AI across a hostile starscape, he has company.

Sverl, an alien Prador, has been warped by Penny Royal and hungers to confront it. But will the AI's pursuers destroy each other or hunt it together? Sverl's Prador enemies aren't far behind either. They plan to use his transition to prove human meddling, triggering a devastating new war.

Clues suggest Penny Royal's heading for the defective war factory that made it. So allies and enemies converge, heading for the biggest firestorm that sector of space has ever seen.

But will Spear secure vengeance for his unquiet dead?

I think what gets me the most about Neal Asher's work is how deep the science is, yet how he makes it feel so easily accessible to the reader. I have learned so much about "cutting edge science" by researching the things he uses in his stories, and this was no exception. I mean, I like to think I know a bit about the 'deeper mysteries of the structure of the universe' but man, the stuff I didn't know, but learned about, after reading this story for the first time blew me away. SO much in fact, I put everything else on hold while I read it again!

And let me tell you, re-reading a Neal Asher story after digging into the science he casually tosses around in his stories... well, it makes them even better the second time around! (And even more engrossing the third time, because now you really understand the story, instead of just enjoying it.)

This tale, as the second in the "evolution of Penny Royal" saga, is a great story, told from the points of view of a number of characters, but mostly it revolves around Thorvald Spear. What Penny Royal did to him would drive most people mad within hours, yet Spear holds it together long enough to realise that the screaming voices and memories of Penny's victims, playing out the moments of their lives in his head, are more often than not giving him key clues, answers and leads towards the inevitable confrontation with Penny Royal that will decide the fate of the Polity, and Prador, civilisations.

As with most Asher books, there's copious amounts of gruesome death - some deserved, some not - but all handled in a way that makes them clear, but somehow not grisly or gory. I admit to being very impressed by how well he manages to pull that trick off time after time without it getting stale.

There are some great little twists in this tale, a few surprises and a few revelations that put the Prador empire into better focus, and also give some very clear perspective on why the Polity/Prador war came to such a sudden and complete screaming halt, and hasn't raised it's ugly head again since. Well played, Mr Asher, well played.

Overall, an excellent addition to the Polity universe, and one certain to please even the most jaded Asher fan. They say that the best artists have tortured souls, and great art requires great loss. The dedication in the front of this book makes me wish Neal didn't have to be such a great artist. My condolences, your loss was immeasurable if it brought forth this jewel.