Where the Wild Things Are review 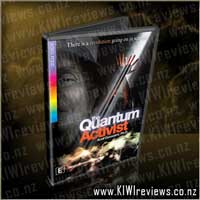 To look at him, Dr Amit Goswami would be one of the most unassuming men you could encounter - a quiet, short Indian man well into his years, with casual clothing and an anglers hat forever on his head. Quiet-spoken yet deep with a philosophy that would bend your noodle even if you were to dip your toes in, this guy is amazing.
He finds a way to pose some of the deepest 'meaning of life' questions in a manner that even the most inexperienced person could grasp, and even manages to inject a touch of humour to drive the point home. I first encountered him when I was around at a friend's place when he watched one of the "What the Bleep" dvds and since then I have managed to track down some of his lectures online.
The guy is fascinating to listen to, because he doesn't rubbish religion to promote science, nor does he dilute the science to promote religion, he genuinely tries to make the point that the two are actually two perspectives on the truth, that the reality we know is a consensual one, created and guided by the collective subconscious minds of all the living creatures that inhabit it.
All in all, this 78-minute docu-interview is probably the best way a thoughtful person could spend a rainy afternoon. There is plenty to think about, and it ties in with many 'new thoughts' we are encountering in our everyday life. Prayer and wishful-thinking meet dedication and visualisation to bring about a new way to guide our lives towards a better future. We may be destroying our planet, but it may not be too late to save ourselves. My only disappointment was the total lack of any 'bonus features' such as sideline information that Dr Goswami referred to during his speeches. Some background on Quantum Mechanics would have been good, as well as more details on the Observer Effect and Heisenberg's Uncertainty Principle.

Inspired by the 2010 documentary, Men who Swim, this movie tells the story of Eric (Rob Brydon), an accountant in the throes of a mid-life crisis, who eventually finds new meaning to his life as part of an all-male, middle-aged amateur synchronised swimming team.

The members of the ramshackle squad slowly learn to reveal their inner lives as well as their paunches, and together they make a bid to compete at the Unofficial Male ... more...