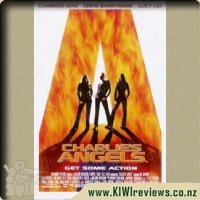 The captivating crime-fighting trio who are the masters of disguise, espionage and martial arts. When a devious mastermind embroils them in a plot to destroy individual privacy the Angels, aided by their loyal sidekick Bosley, set out to bring down the bad guys. But when a terrible secret is revealed it makes the Angels targets for assassination.

This movie was a mixture of good and bad things, combining the action packed awesomeness, with corny and incredibly sexist dialogue. Based off of a 70's television show, it is apparent that it was decided to follow the show reasonably strictly, rather than adapt it for the more politically correct world that we live in today.

The film follows the diverse trio of attractive women hired as private investigators by an unknown millionaire, who end up fighting crime on a regular basis. While there is a lot of action in this film, the shots would be more appropriately referred to as a photo shoot, than an action sequence. There is an overwhelming theme, or these women kicking ass and looking good as they do it, whether it be in stilettos.

While the movie was not displeasing to watch, it did lack realism and was not in the slightest bit believable, but still lacked credibility as a comedy. With the three leads covering off many tastes; from ginger, to blonde, to brunette, from Oriental to Caucasian, and from blue to brown eyes, Charlie's Angel's provides eye candy that most men can sit through, whilst the women can enjoy a film that promotes the female gender as strong, and independent, despite their need to always look incredibly attractive.

Some big screen adaptations do well and others are less than appealing, Charlie's Angels lies somewhere in the middle.

For those who don't know it, Cgarlie's Angels was a popular 70's TV series about three female detectives (of sorts) who take orders from an unknown boss who they only know as Charlie (John Forsythe reprises his role as Charlie in the movie). This time around we have new angels played by Cameron Diaz, Drew Barrymore and Lucy Liu. With the sometimes inept help of Charlie's assistant Bosley (Bill Murray), the striking detectives investigate a kidnapping and retrieve some highly technical software that could lead to the death of their boss.

Although contrived and a bit silly this movie is an action filled escape. There is no doubt that this explosive trio of crime-fighters will be back to use their skills and complete their mission. My only problem is that half the movie seems to be focused on making the actors look as sexy as possible whilst saving the world and their boss, not a huge biggie, but there are some scenes that are more than pointless. And as for the plot, well at times you forget what they are even meant to be doing, so not the best of screen writing.