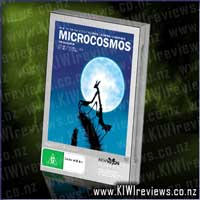 Utilising special macroscopic photographic techniques, the filmmakers created this fascinating and visually spectacular look at the hidden worlds in the life cycle of an ordinary meadow in France.

Insects become gigantic beasts, blades of grass turn into towering monuments, and raindrops form puddles that resemble vast oceans. The filmmakers find humour, drama, and beauty in the lives of these tiny flora and fauna as caterpillars transform themselves into butterflies, beetles struggle with their day's foraging, and snails reproduce their species.

"Microcosmos" is an absolutely fascinating documentary focusing purely on insects, taken almost from a "bug's eye view". With pieces of music throughout that fit the "mood" (romantic classical music being played while two snails get up close and personal, for example) adding a nice touch, the cinematography is downright stunning. So many fascinating tiny creatures! Containing drama, suspense, romance, even comedy, this is far more a movie than a documentary!
The only negative thing I found with it, at first, was the lack of narration, which left so many questions unanswered, quite unlike most documentaries where they explain as they go. But upon thinking about it, I realised this was actually quite a bonus, as it lead to many interesting conversations with my son, whom I've just changed over to homeschooling, and gave some great excuses to go and do further research on our own- eg: why on EARTH did those fuzzy caterpillars form a chain, and then all pile up?? And just what WAS that type of spider that was making a big bubble of air under the water? These were just a couple of the questions we were asking throughout the movie, when we weren't in hysterics due to ours and my partner's personal commentary for some of the segments. After watching "The Story Of Five Cesars" (a thoroughly fascinating section in the Special Features, despite being all in French, meaning one has to sit and read the subtitles- unless you have a good understanding of French of course.), I thoroughly agreed with each person who was interviewed, as they all mentioned how if there had been a commentary, it either would have been so full of scientific names that the viewer would have been totally lost and forgotten most of it by the end, or it would have been so simple as to merely be stating the obvious. Watching the film, most of it is pretty self-explanatory, and, as the Producer (Jacques Perrin) said, by not having all the names of the insects etc throughout the movie, the viewer is more likely to go off and research the information themselves, and therefore have it lodged a lot more firmly in their memory than if it had been given, in amongst a whole score of others, during the movie. Definitely a great way to encourage kids to actually want to learn more about the insect world!!
We have happily sat down and watched this DVD several times already, and each time, have found ourselves totally enthralled in the day to day life of the mini world around us that, most of the time, we have gone about our lives, completely unaware of. Not any more! Microcosmos will definitely be a favourite among our rapidly growing collection of Documentary DVDs, and one that I would highly recommend be added to your shelves whether you have kids or not!!
One of the best insect documentaries I've ever come across!!

From the dark heart of Transylvania to the streets of London, Dracula charts a bloodthirsty course in his obsessive pursuit of Mina Harker.