« March of the Dinosaurs review

Doctor Who - The Legacy Collection review 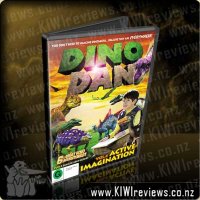 In Dino Dan, 10-year-old Dan Henderson (Jason Spevack) - nicknamed 'Dino Dan' by his friends - is an ordinary boy with an extraordinary obsession: he eats, sleeps and breathes dinosaurs. A typical day for Dan isn't complete unless he's racing a T-Rex on his school track, finding a Pterodactyls in his attic or getting a baby Brachiosaurus back to its mum.

However, while Dino Dan is an expert in dinosaurs, he also specializes in pulling his motley crew of classmates and teachers into his larger-than-life adventures. Set in modern day Toronto, the series has become a definitive dinosaur series for kids - mixing entertainment with educational facts on these prehistoric giants.

We sat down to watch this DVD this evening. My daughter wanted to see it the moment we got it home but then got herself distracted by digging out all her plastic dinosaurs. Once she was ready we put the DVD into the machine and I thought "just one episode before we go to bed". Well, who can watch just one of these shows? This is a live-action kid's show which seems to be aimed at pre-school and primary school aged kids alike. The group of kids at Dan's school are a nice group of kids. The kind you'd like your own children to interact with. Wholesome but without being totally straight-laced. There are one or two screwballs which round the group out nicely, There's no outward bullying which is awesome considering the show is about a 10 year old who imagines dinosaurs everywhere.

This DVD has 6 episodes of the show on it and the run time is approximately an hour. The price is pretty standard for a kid's DVD, but I was surprised how cheap it was. The inclusion of two field journal video entries as special features was a great surprise, though my daughter wished it had more of those. I will definitely be looking for other volumes. Dino Dan is one of my daughter's favourites. She loves a lot about the show. The CGI dinosaurs roaming everywhere. The way Dan is always thinking, scientifically about how dinosaurs might have lived, hunted, fought, etc in their own time. She loves his mum and little brother characters and his dog who has the same name as her daddy too.

For me, I love that this is a non-typical family. Dan and Trek live with Mum. Dad is not in the picture. I think from earlier shows he might be a paleontologist at a museum and is either not with mum or is away a lot. But it explains Dan's love of dinosaurs. I love that Mum is a kick-ass cop, who does karate and gardening and all that mum stuff as well. A good strong independent maternal character is always a great thing in kid's shows. I do sit and wonder if anyone else sees the dinosaurs. If they might one day get him tested for mental health issues. But then I remember to suspend my disbelief. After all tomorrow there will be baby dinosaurs climbing all over the roof of our car, and a T-Rex in the middle of the driveaway.

During one sequence, the camera plummets as far as 5,000 metres below the ocean to find some of the most extraordinary alien-like creatures you'll ever see - some of which are newly discovered species. After seeing this, it comes as no surprise to learn that more is known ... more...