Ihaka and the Unexpected Visitor review 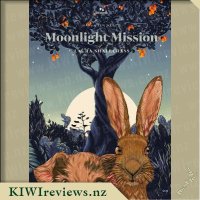 Disclosure StatementFULL DISCLOSURE: A number of units of this product have, at some time, been supplied to KIWIreviews by Beatnik Publishing or their agents for the purposes of unbiased, independent reviews. No fee was accepted by KIWIreviews or the reviewers themselves - these are genuine, unpaid consumer reviews.
Available:
November 2022
Samples for Review:

It has been a dry summer in the valley. Kunekune knows something is up because food is going missing. Hare wants to mount a defence to protect the precious food that remains, but is that the right approach? Sometimes, the answer lies right next to the issue.

Moonlight Mission is a beautifully written and illustrated story of community, ingenuity, and the power of coming together to solve a problem.

Having already reviewed two of Laura Shallcrass' books with other young friends, I am familiar with her artwork so was hopeful that this book would reach the same high standards. I was delighted to find that it was just as stunning, and could not wait to share it with two of the children in our family - Mr Two and Miss Three. They are cousins and spend quite a lot of time together, so they were happy to perch on the sofa with me and read it.

We started with the front cover which features the two heroes, Hare and Kunekune, looking straight at the reader. Miss Three recognised that Kunekune might be a pig, but neither of them knew what Hare might be. They have never seen a hare in real life, so I had some explaining to do. What they did understand was that Hare and Kunekune were best friends and would cuddle up together to sleep. "Just like us!" said Miss Three. She has a peach tree in her garden too, so she thought that was a really sensible place for a nap.

During the course of the story the creatures they met included birds, Frog, Ruru, and various flying insects. We had to stop at each page to decide what noise each one would make. The first three were easy, but none of us knew what noise the insects might produce so we settled for a whooshing sound. Reading the book was a slow process as the children had to point to each creature and identify it before making the appropriate sound. Mr Two loved making the sound effects and was much louder than his cousin.

The theme of the story is that of sharing. Both Kunekune and Hare are annoyed that the food supply is dwindling, but it is reassuring that Ruru appears to be on their side and has found a solution for them. At his suggestion, all the creatures arrive with a contribution, whether it be food or just some entertainment, and they all have a big feast together. I thought the story ended a little too abruptly - I would like to have seen a clearer picture of everyone eating together and enjoying one another's company. Mr Two in particular was looking for Frog on the last few pages as that was his favourite. Some of the stylised images were too hard for him to make out.

Overall, the children loved the book. The text was a little too advanced for Mr Two, but Miss Three was able to follow it and she happily explained to her cousin what was going on each time I turned a page. I read the text first and then she took over and analysed it for him, adding comments of her own as she went. It was lovely watching the two of them enjoying the experience. They were so into the reading that we all forgot to take a photograph before they left. Still to be decided is who gets to take the book home to keep!

Shadow is up to something with the water supply but what could it possibly have to do with the filming of a new action movie?

Special Agent EJ12 needs to keep her eye on the big picture. She needs to infiltrate the movie set and stop Shadow before it is too late. That's the easy part. As EJ12, Emma Jacks can do anything.

So why is she getting worked up over little things? Perhaps she isn't, after all.