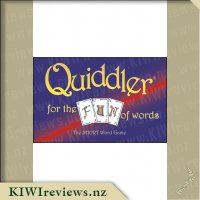 Quiddler challenges players to create words from an ever-increasing number of letter cards in their hand. The game lasts eight rounds, with three cards being dealt to each player in the first round, four cards in the second, five in the third, and so on. Each card has one or two letters on it as well as a point value.

On a turn, a player draws the top card from the deck or discard pile, then discards a card. When a player is able to use all of the cards in his hand (with one left for discarding) to spell words - each of which must contain at least two cards - he may go out by placing the words on the table. Each other player takes one final turn, then plays as many cards as they can in words.

Each player now scores, adding the point value for cards used in words, then subtracting points for any cards remaining in hand. In addition, the player with the most words and the player with the longest word each receive 10 bonus points; in case of a tie, no one receives the bonus. Whoever has the highest score after eight rounds wins!

I've had my copy of Quiddler for 22 years now and it still makes a fun game to play. The premise is simple, you need to use the letters that you have in your hand, into words, using a minimum of two cards. This means that your first couple of hands you may not score much, but as the game goes on you can create even longer, better scoring words for some real high scores. Your first hand you start with just three cards and by the final round you are holding ten cards. This is easily playable as a two player game, the only difference is that you use only one bonus points rule instead of two, either the longest word or the most words made.

It is very handy to have a dictionary on hand, one of the few times I find now, where a physical dictionary (or in my case my grandparents scrabble dictionaries) really do come in handy and are easier to use than trying to find it on the internet. You take your turn either picking from the draw pile or the top of the discard pile, and then either play your cards (all your cards must make a words/words and still be able to discard one final card) or you discard and play continues. Once someone does place their cards, everyone else gets one more turn. You score your words and minus any cards left, and don't worry, you can't dip into the negatives.

This is a steady favourite in our house and I'm sure we will play it for many years to come.

Being a child is fun!

MimiQ - the fun children's game that really makes the whole family act like a child - literally!

Make the facial expression on one of your cards to steal those cards from your opponent. If you don't have the card that your opponent is asking for, let them know by sticking your tongue out at them.