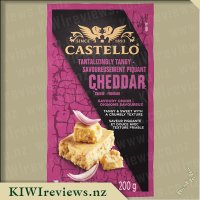 Disclosure StatementFULL DISCLOSURE: A number of units of this product have, at some time, been supplied to KIWIreviews by Castello or their agents for the purposes of unbiased, independent reviews. No fee was accepted by KIWIreviews or the reviewers themselves - these are genuine, unpaid consumer reviews.

The rich, savoury flavours of mature cheddar are complemented by the addition of red onions for a cheese that stands on its own or on a cheese board.

Perfect grated on pizzas or in a tasty toasted sandwich! 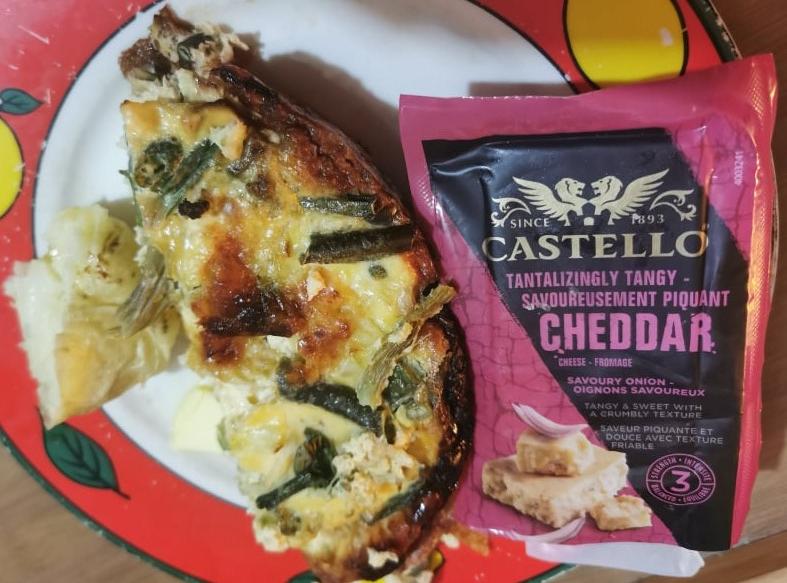 This is quite simply one of the nicest strong cheeses we have tasted. The onion flavour is definite but not overpowering; I was delighted that the children turned their noses up at it because that meant there was all the more for the grown-ups. Because it is tasty, a little goes a long way. We all tasted a small amount then discussed how best we would use it.

I had been planning a quiche for dinner and had organised some ham to go with it. Plans were quickly revised when it was pointed out to me that the cheese would be perfect in a quiche in place of the ham, and that I would not need much at all. I was convinced; the egg mixture was duly poured over cooked celery, green beans, and leeks; about 40g of the cheese was then mixed in. I did not attempt to grate the cheese as it was quite crumbly; instead, I chopped it into small pieces before adding it. I finished off with a few strips of cheese mixed with parmesan to top the quiche.

Quiches are quick to make and are a great all-in-one meal to serve with a side salad. I had made it in small plates; half a round made a substantial serving, and it cooked much more quickly than it would have done in a large dish. We could smell the onion as it came out of the oven, and the taste exceeded our expectations. It was wonderful! I was sorry I had not made double the amount as we would all have been back for second helpings had they been available.

The next dish was a platter of fried tofu. Tofu is funny stuff; it has little flavour itself, but is happy to absorb added flavours and reinvent itself as a new dish. That was the case here. I had sliced the tofu into strips and then precooked it, intending to serve it on top of a platter of stir-fried vegetables and nuts, but it lacked interest. Around 50g of cheese was crumbled on top and the entire dish put under a grill to brown. Everyone loved it. I am going to try the same idea with scrambled eggs at some stage; I think that would work well too.

There was still half a packet left, and we could not go far wrong with the good old kiwi snack - crackers topped with slices of tomato and cheese and then seasoned with salt and black pepper. This was a staple when I was a child, and it has never lost its appeal. But the traditional version used a milder cheese or even - horror of horrors - the processed variety. This one was definitely for the older people; it would be wasted on anyone under 15 unless they were really into gourmet food. I thought we had put out plenty, but the plate emptied at an alarming rate so I had to keep replenishing it.

We all agreed this cheese is great value for money. We got two meals each for four people and still had enough left over for a snack. I think this is one cheese I will be looking out for again in future.

I enjoy a number of cheese types such as gouda and blue-vein, but my all-time favourite has to be aged cheddar. I love the tangy hit, the crumbly texture that makes it very versatile, and that it doesn't seem to go 'green' in the fridge as quickly as younger cheddar does. So when I ran across this little gem at a recent food show, I simply had to try it. After popping a small cube of it in my mouth, I was instantly hooked - it ticked all the 'aged cheddar' boxes for me and then blew me away with the added hit of caramelised onions.

I immediately thought of at least five recipes that I make regularly that would be pushed up a level by the use of this cheese instead of the usual cheddar I use, so it was with some delight, and considering the price more than a little trepidation, that I started to experiment. Unfortunately, my first attempt at cheese scones was a disaster - I misread the symbols on the oven dials and grilled the scones into oblivion by mistake. I was so annoyed - that was a waste of half a block! So then decided to opt for something that required no fiddly dials and had to have me right there the whole time - cheesy chicken quesadilla!

Utilising the last of my Farrah's Wraps I powered up the sandwich press and got to work breaking down the last of the previous night's roast chicken. After grating some of this cheese I realised I would use up all I had left, so I decided to mix it 50/50 with regular cheddar. After spreading that over one of the wraps, I layered on some shredded roast chicken, sprinkled on a bit of 'Handle the Jandal' spice mix for a bit of extra kick, topped it with the last wrap and popped it into the press to cook. It took about 2 minutes, and I could hear the cheese sizzling.

The flavour, after I let it cool down below 'liquid lava', was amazing. I could still taste the caramelised onions, the tangy bite of the aged cheddar, and the softer taste of the regular cheddar. Oddly, I got very little of the chicken flavour, but I didn't mind in the least - it worked well at holding the cheese in place and that was all I really needed it to do.

The last small hunk of this cheese was put to use the following day - I crumbled it up into small bits and scattered it over a bowl of plain ol' baked beans. Another triumph, as it elevated a boring bowl o' beans into something quite remarkable. This is on my shopping list now, and I will be buying another block (or three) when I next spot it in the supermarkets. My only two regrets: I have no more right now, and I was so lost in the flavours that I neglected to take a photo of either of the successful dishes. #oops

Just Noodles are different
Created by a real chef to bring to you the best authentic flavours from around the world, right to your plate.