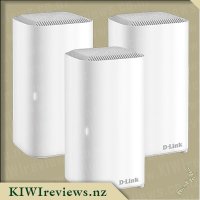 With the threat of further Level 4 Lockdowns rolling out nationwide no longer on everyone's horizon, socialising at home is back to being normal. Everyone has a mobile, and we often allow friends and family to retain access to our internet connection, so having a system in place that is robust and intelligent enough to handle our day to day information requirements, but also have enough oomph to handle a sudden influx of new, authorised devices without stalling out, is pretty important. Pair that with the need for extendable network coverage across wide, tall and/or multilayered properties and a mesh system is the only logical option.

The D-Link COVR-X1873 is a 3-node integrated mesh system that can cover an area up to 740 sqm with a solid, singular connection that is intelligent enough to focus signals to low-power devices, enabling stronger signals and stable connections, without sacrificing bandwidth for the high-power, high-speed devices. A big part of the success of this system is how decentralised the network control system is. Each node has four gigabit ethernet ports, allowing for non-WiFi-enabled devices such as older consoles and NAS boxes to be attached to the network easily. Plus, each can act as the main router allowing your network to be reconfigured quickly should one node fail for any reason. This modular co-operative design also means that the network can be easily expanded seamlessly just by adding more nodes - available in 1, 2 or 3-packs -with no tech degree required.

Setup is surprisingly simple, with the modular nature of the units and an updated app. Attach one of the units to the router or modem supplied by your ISP, open the D-Link WiFi app on your mobile, click to add a device and just scan the QR code on the base of the unit. After that, the app will pretty much take over the process, asking for a few bits of information from you along the way. Once that is done, you repeat the process for the other nodes, integrating them into the network. The only thing is, this is not a quick process, as each update to the network requires the whole network to reboot, so expect this to be a simple and relatively stress-free, but drawn out, process. It took me about a quarter of an hour, which really isn't that long if you aren't the impatient type. Grab a cuppa to enjoy in the downtime and it won't be that bad - the actual 'do stuff' is only a few minutes scattered between reboots.

The system is Wifi 6 ready, and while that may not be a big issue for most buyers nowadays, consider how rapidly the Internet Of Things is growing - home security sensors, cameras, doorbells, lightbulbs, thermostats, fridges, washing machines, robovacs, TVs, speakers, home assistants and probably many others I am not yet aware of - and the increased ownership of smart mobile devices be they phones or tablets, and it is easy to see that having the capability to handle the inevitable flood is a better choice than suffering rolling dropouts as you do incremental upgrades. Each of these nodes is capable of a maximum throughput of up to 574Mbps on the 2.4GHz band and 1200Mbps on the 5GHz band in theory. However, we all know reality never seems to match theory as often as we'd like. However, I had to at least try and see what the maximum I could get was. I used my phone to connect to this network locked to the 2.4GHz band and ran a speed test, and again locked to the 5GHz band. The results were as expected - the speed-check actually topped out at the limit of my fibre connection, not the limit of the network.

It was obvious I wasn't going to push any limits by drawing on that as a source, but I could draw on a local source - the local media library in the office network - so I began to pull out of storage every WiFi-enabled device I could find, and set them all humming a good tune. With 21 devices - ranging from smart home security sensors and old smartphones playing MP3's to Windows 7-based laptops running movies and even a couple of old Xbox consoles - I was still seeing no lag and could easily have added quite a few more devices I think. Gamers will appreciate being hooked directly into the main internet connection, reducing lag significantly in some cases.

When it comes to ensuring the best signal at all times, the placement of the nodes is a huge factor. The biggest mistake most people make is thinking of the nodes as fenceposts so they place them at the edges of the space they want to cover to 'fill in the area' between them with super-signal. Alas, that's not the reality of it, and instead, you get a big dead zone in the middle of your house in most cases. Each node could instead be thought of as a lawn sprinkler. You want to water as much floor space as possible, allowing that the 'water' will pass through most walls, and build a pipeline that the signal can spread out from. This also means that each node has a solid connection back to the router ensuring maximum internet speeds and no bottlenecks.

Not having kids at home anymore, the need for Parental Controls is no longer something I need to factor into my daily life, but I did have a good poke around and the controls are as to be expected - powerful, adaptable and fairly easy to set up even if you aren't a tech guru. However, because there wasn't anything in there that could be considered a 'revolutionary' upgrade, I won't dive into the minutiae and just say that if you need them, they are there and they will do what you need, with ease.

Overall, this is a great upgrade to D-Link's COVR range and one of the smartest upgrade/replacement options for anyone already experiencing rubbish WiFi. However, I would be remiss if I didn't mention one small disappointment - the lack of USB ports on the nodes. I have a small stack of portable USB drives sitting around that I would like to be able to use as non-localised backup storage. While most mesh kits out there offer USB ports on the 'main node' at least, I would have liked to see it included on a unit as fully featured as these. Nonetheless, it is a small thing and doesn't in any way detract from the final performance. While there are cheaper options and offerings out there, the inclusion of the WiFi 6 capability more than warrants the small price increase, in my mind.

ADMIN NOTE: THIS ESTABLISHEMENT HAS RELOCATED TO A NEW VENUE. SEE THEIR WEBSITE FOR MORE DETAILS.

Dynamic Computer Solutions Limited, has been based in Palmerston North since 1994 and is committed to producing high quality computer systems.