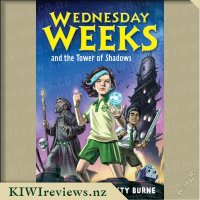 Wednesday Weeks and the Tower of Shadows product reviews

In a world of magic, can science save the day?

Wednesday Weeks never wanted to be a sorcerer's apprentice. She'd rather study science than magic. But when her cloak-wearing, staff-wielding grandpa is captured by a power-hungry goblin king, Wednesday must find a way to embrace her magical heritage and rescue him from the dreaded Tower of Shadows.

Luckily, she's not alone. Her best friend Alfie is a prime-number fan and robotics expert who's all-in on Wednesday's epic plan involving parallel universes, swords of power, and a wise-cracking talking skull.

But it's going to take more than science, magic, and the world's cutest robot to take down this bad guy. Because the goblin king is playing for the ultimate prize - and Wednesday and Alfie just walked into his trap...

When a book says it's going to try and mix science with magic I always feel a little dubious, especially if the book is aimed at the eight to twelve range, but having a lull at work and a readers copy, I figured I would give this a try. Not only did I finish the book, I enjoyed it as well. Right from the start there was humour, with Wednesday's "Grandpa" arriving mid-class and her exasperated reaction along the way, I found their relationship quite entertaining. Wednesday loves science but unfortunately keeps making things blow up and to top it off, her "Grandpa" is training her as his apprentice and she isn't all too good at it so far.

Soon enough, things take a turn as her friend accidentally enters a portal with her, her "Grandpa" gets kidnapped by an evil goblin and she has to protect a ring from falling into said goblins grimy hands. Wednesday and Alfie set off on an adventure, which includes a laundry labyrinth (complete with monster), a talking skull that kind of helps them out and freeing her "Grandpa" from the evil goblin king, who wants the ring in order to take over the worlds. The authors here, did a really good job of using magic to explain why her science wasn't so good but also how her love of science could be used to harness and use her magic correctly (such as the chemical formula for a fire extinguisher and then using magic to multiply it). My favourite part would be involving the laundry fairies (but I won't go into that as I don't want to spoil it).

This is a fun book, a good take on learning magic and how to control it with fun, capable characters.

The Wars of Light and Shadow Volume nine. Book One of Sword of the Canon.

The long-awaited beginning of the fourth and final story arc - Sword of the Canon - in the epic fantasy series, the Wars of Light and Shadow.

Betrayed and double-crossed the last Prince of Rathian, Arithon s'Ffalenn, is held captive by the Order of ... more...