« Lockdown Tales - What Comes After the Polity review

A Call To Spy review 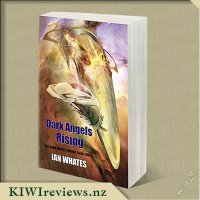 The concluding volume of the Dark Angels Trilogy, which began with the Amazon UK #1 best seller Pelquin's Comet.

The Dark Angels - a notorious band of brigands turned folk heroes who disbanded a decade ago - are all that stands between humanity and disaster. Reunited with their ship, The Ion Raider, Drake, Leesa, Jen and their fellow Angels must prevent a resurrected Elder, last of a long dead alien race from reclaiming the scientific marvels of his people.

The resurrected alien, Mudball, has discovered the whereabouts of the ultimate Elder cache, long considered to be a myth. Supported by an outlawed military regiment and a star-spanning criminal organisation, Mudball is intent on using the scientific marvels stored there to establish itself as God over all of humankind.

Can one ship of reluctant heroes hope to stop them? The Dark Angels know they have little choice but to try.

Available as a numbered limited edition hardback, signed by the author, as an A5 paperback and an ebook.

In a traditional trilogy, the usual process is that Book 1 sets the scene, introduces the key players and reveals the plot initiating event. Book 2 develops the key characters, giving them better depth and sets their roles in the drama to follow. Secondary characters appear and are developed a little, and often a tragedy will happens that pushes the main plot forward - it could be the death of what appeared to be a key actor, a natural, or not-natural, disaster, or the revelation of a past crime. Book 3 is usually "the big fight" or struggle towards the ultimate goal, often including a few more tragedies to really roughen up the plot flow. A few twists and red herrings thrown in for good measure.

It would be only fair, at this point to admit to the fact that this is the only book in this series I have come across. So jumping in at Book 3 was a risky move, because there is plenty of back-story I didn't have access to. Despite that, the story was actually quite easy to follow after the first few chapters. There was enough dialogue and subsidary commenting to fill in the rough outline of the larger plot, and any little sub-plots in the previous books that might have been still relevant got touched on as the drama unfolded. This is the hallmark of an excellent author who is willing to welcome a reader at any point in the tale and give them something worth reading no matter which book they pick up first. And yes, I now plan to source the previous books, which I see my local library has on the shelves, to backtrack and catch up.

I really liked the way Ian approached what is quite well-address trope - space-soldiers fighting the good fight against an enemy they really don't know enough about, but somehow manage to get by and survive long enough to win through sheer grit, good luck and some smart decisions at critical moments. There were a few red herrings, and some great twists thrown in which kept me intrigued even when the plot slowed down a bit in place. It was appropriate that it did so - even super-soldiers need a breather, some R'n'R and a chance to reload on ammo - and dropping in the exposition to address relevant back-story information in these places was a great way to keep the flow going. You can afford to skim-read those bits if you had read the previous books, though the refresher would be welcomed by some I am sure, but they provided an excellent and believeable way to deal with the issue for readers without that knowledge.

What impressed me the most though was how well Ian handled trying to describe the various and varied "abilities" of the Dark Angels, how some of them were equipment-based while others were the result of alterations to the 'Angels' themselves. The effects of these abilities could easily have been a nightmare to untangle during a fight scene, but Ian managed to give just enough detail to keep the reader informed, without drowning them with too much clutter. Let's face it, a battle in space with super-powers would be hellish to try and cope with, so to keep the story clean enough to read while still imbuing that sense of urgency, the moments of frozen panic, the chaos and the terror... I felt like I was watching the fight on a screen. Better than being in the middle of it, for me at least.

Overall, this book would be quite good as a stand-alone story, but clearly has its place in a larger story arc. It's not often I get captured by a story when my first encounter is so far through the big plot - there's only been two other authors that have captured my attention thus - Isaac Asimov and Neal Asher - so Ian Whates is now most assuredly on my "stay tuned" list of authors I will actively seek out in bookstores. It's a very, very short list, for what that may be worth. Regarding the price - it's a little higher than I would normally pay for a book of only 230 pages, however this is a small-run publication by the author's own publishing house. Economy of Scale means that small-runs means big price. That said... it's well worth it.

Score: 9.5
Product reviews for listing 825: The Wheel of Time : Knife of Dreams -  Written by Robert Jordan

The Wheel of Time has captivated a generation of readers, becoming an international bestseller. Now RObert Jordan brings us the thrilling penultimate volume in this ground-breaking fantasy epic.

As the very fabric of reality wears thin all portents indicate that Tarmon Gai'don, the last battle, is imminent - and Rand al'Thor must ready himself to confront the Dark One. But first Rand must first negotiate a truce with the Seanchan ... more...