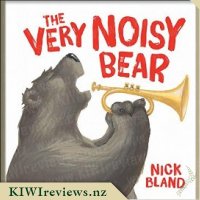 There's music in the air in the Jingle Jangle Jungle!

Music has caught the ears of one very sleepy Bear. Bear's friends Moose, Zebra, Lion and Sheep have formed a band, and since Bear is already awake, they invite him to join. But first they'll have to find him just the right instrument to play. He tries the drums, the guitar and the trumpet. Turns out he's a very noisy bear.

Then finally he tries the microphone, and it seems Bear has found just the right instrument to play. Nick Bland's fifth book with Bear and his friends, is a wonderful celebration of friendship, teamwork, and finding your talents.

I was keen to read this book and share it with my two boys. I had heard about 'The Cranky Bear' from the same author so that was a selling point and also our family has a love of music and are currently learning about different instruments. The illustrations in this book are well done, using soft colours. I really didn't think that this would be a focus for Mr 4 but he was very keen to look at how the pictures were painted, He realised that there was not a lot of detail and I think this inspired him for his own drawing. He quite often does not want to attempt drawing pictures as he thinks 'he cannot do it'.

The book is written in rhyme which is a hit with any audience whether it be the young or the old. It always encourages and extends language. I love reading and seeing if Mr 4 can finish the sentences. There is also quite a bit of punctuation in this book, which as a teacher is always great to discuss and in a book like this made it very easy to explain. I loved the introduction of instruments. Each animal played something different. I liked how each animal gave bear the instructions on how to play their instrument. Obviously the animals instructions were very brief and this also became quite a talking point as Mr 4 realised that instruments take a long time to master and maybe suited to different people.

This book is definitely a hit in our house and I have since gone out and purchased 'The very Cranky Bear'. I think my boys might just find other books by this author tucked up in their xmas presents.

The Very Noisy Bear is the latest adventure for Nick Bland's Bear. I haven't read any of the other books but have heard good things about them. The title along with the cover depicting a bear playing a trumpet appealed to my sense of humour. I was curious to find out what the bear was going to do. I wasn't disappointed.

The book is written in rhyme which we all loved. There are different animals playing instruments which appealed to my daughters (5 and nearly 7 years old) that had just seen the NZSO performance with school. They were pleased with themselves that they could identify all the instruments and animals.

Bear quickly realises that playing an instrument well takes lots of practice and he isn't to a performance standard first try. He finds the microphone is best for him and becomes a hit with the audience. This is teaching the children reading it that they can't be good at everything first time; practice makes perfect and there is something that we are all good at. All of these are important life lessons from the humble picture book.

It is important when considering the price for this book that $21.00 is for a hardcover picture book by an acclaimed author/illustrator. It is a book best suited for 3 to 5 year olds. It made my youngest giggle and she was good at predicting the rhyming words. My eldest still enjoyed it (as did I) but we weren't the target audience. You will like it but your pre-schooler will love it.