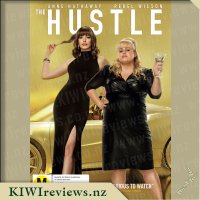 Five minutes into The Hustle and the four of us were looking at each other and rolling our eyes. It did not promise to be particularly good. We were prepared for a ho-hum sort of evening and had resigned ourselves to sitting through it anyway because it had been a long day and we were happy enough to just blob out in front of the screen. Ten minutes into this movie and we were laughing like lunatics. It was in fact really funny - and it got progressively funnier as the story unfolded. What we had thought was going to be a B grade movie turned out to be amazingly enjoyable!

The story should have been predictable, but it wasn't. There were several unexpected twists and turns that took us by surprise, another bonus for four people who are seasoned film buffs and thought they had seen it all. I enjoy films that challenge me to predict what will happen next, and am suitably impressed when I am proven to be wrong. The basic plot should have been simple enough, inspired as it was by Dirty Rotten Scoundrels, but it was just that - inspired by, but in no way a clone.

The casting was perfect. Anne Hathaway, as the glamorous Josephine, is the perfect villain who would not be out of place in the James Bond stable - she radiates chic, wealth, entitlement, and a cool command of most situations. That makes it all the funnier when she does not get what she wants, although she is poised enough to quickly turn any misfortunes to her advantage. Rebel Wilson, as the blowsy Penny Rust, is the ideal counterpart to Josephine. She could not be more different. Her clothes are loud and ill-fitting and her whole manner is one of confrontation. In combination, they are an unlikely pair of rogues who change constantly from being colleagues to arch-enemies and back again.

We all appreciated the full-on performance by Wilson. She is larger than life and radiates pride in her physicality. She is supple and willing to push her body to its limits without worrying about the odd glimpse of well-padded midriff or double chin. This makes a refreshing change from the conventional Hollywood dictum that, while male stars can be elderly, overweight or balding, female stars should be young and slightly underweight. Wilson's message to her audience is one of empowerment through being comfortable in your own body no matter how it is packaged. This is such an important lesson for young people who are so vulnerable to media influences and may be struggling with body image issues. Wilson is an attractive woman who just happens to be on the large size - and so what!

Alex Sharp is a delightful addition to the cast: his role as Thomas Westerburg is that of a foil to the two women. He comes across as really young and innocent; we found him to be an empathetic character - especially when he is so caring towards Penny. Thomas' enthusiasm is more that of a teenager than an adult, and I for one kept wondering what he would do when he discovered the nefarious aims of the conwoman duo. What all three actors have in common is the ability to take on their roles so completely - there was never a feeling that they were "just acting".

In conclusion - this is not a great film. But it is a wonderful way to spend time in a world of fun and laughter - and that is what the film sets out to do. It is entertainment, pure and simple. It does not need any serious analysis to show how technically perfect and innovatively crafted it might be. Sometimes you need to go with the moment and just enjoy!

Embarking on an incredible adventure to lift the curse, she finds ... more...