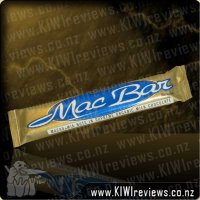 Disclosure StatementFULL DISCLOSURE: A number of units of this product have, at some time, been supplied to KIWIreviews by Mac Snack for the purposes of unbiased, independent reviews. No fee was accepted by KIWIreviews or the reviewers themselves - these are genuine, unpaid consumer reviews.
Available:
via the company website, at selected quality retailers and Farmers Markets

I really did save the best till last!!!!
Where I found the dark bars too bitter for my poor tasted buds I found this lovely milk bar just right. It just melted on my tongue and the after taste I was left with was delicious!
I found the amount of macadamias a surprise, alot more than what is stated on the packet. That alone will make me buy more :)
To be honest I have never really worried about organically grown/produced foods but to know that I can eat a yummy treat such as this bar and know it is good for me and has health benefits as well as being a organic kiwi made bar is AWESOME!

Thank you Mac Snack, you have made my day :)

I love chocolate. To the point where I will ignore yummy healthy kai in favour of a peanut slab or a picnic bar if it is within reach. The chance to try these was too much to resist, or so I thought. I put them in my fridge and pretty much forgot about them until one of the visiting mokopuna saw them hiding under a block of cheese and asked if he could have one. I didn't want to disappoint him by saying "No, that's just for Koro" so we sat down together and did a team review.

The end result was one small sticky face, one big sticky face, and a lot of laughs while we tried to keep the puppy from licking us to death. But we both agreed on all counts, these were some of the best chocolate bars we had ever tasted. Usually the only nuts in my house are the ones sleeping on the couch, but I am thinking macadamia nuts might just be something I want more of.

The chocolate was so smooth and velvety it almost melted on my tongue, leaving crunchy sweet nut chunks for me to chew on afterwards. It was almost a shame to see the end of the bar. I say almost, because we still had two more bars to try, so it wasn't going to be all that bad, eh! I am thinking if I see these in the shops or at a farmers market, I will probably get some to share around the rest of the whanau at the next family dinner.

My life recently has been a madhouse, with little time to chill out and try something new. So, it was with great pleasure I shoved the remaining two Mac Bars into my bag for a day at Fieldays. I figured I was in for a lot of walking, so taking along some high-energy snacks would be a good move.

Having tried macadamia nuts previously, and finding they are far more appealing to my tastebuds than peanuts are, I was prepared for a yummy snack. What I wasn't prepared for was just how radically different organic chocolate was to regular chocolate. VASTLY superior!

The texture was so smooth and creamy even for a milk chocolate, and the pieces of macadamia nut enhanced the appeal no end. What surprised me, as it clearly did for other reviewers too, was the percentage of nuts states 30% but looked and felt more like 50-60%. Quite a difference between perception and reality, and in the opposite direction to most products out there where the stated amount is far higher than your mouth thinks!

Overall, this was a very yummy snack, very reassuringly natural - everything is organically produced and done by hand in the one factory - and totally decadent! The only off-putting factor is the price. Despite being entirely justified considering how much extra effort and expense goes into organic-growing and hand-made produce, the Almighty Dollar rules us all these days, and cheaper is better... at least for the wallet, if not the body. Personally, I think that's a shame, because if there was a way to make these goods at a lower price, everyone would be the winners.

Ok first and foremost...until now I have never had organic products, so the mac snack range of goodies I was given to review were new for me not only because they were organic but also because I have also never tried macadamias lol

Now I do not know what you should expect from organic food, other than they are not chemically enhanced or treated in any way, and would you believe that this is obvious with this chocolate bar? I do not know what it is that makes you know you are eating something that is natural and dare I say it, good for you, but you just know with every bite of this delicious morsel.

The chocolate is soooo smooth and velvety, even the colour of the chocolate is just well far more chocolatey than anything else out there. It also appears shinier and well its just tastier. The odd thing I found was that the chocolate was not overly sweet, but yet it had a kind of salty, no tang, to it that you do not get in other chocolates. Perhaps this was the macadamia flavour mixed with the chocolate, but whatever it was, it worked and it was good

KIWIreviews have these listed with a price range of between $1.75 - $4.00 per bar. I do admit that there is not a chance I would spend $4.00 on one of these, but I do believe I could quite easily spend up to $2.00 for this one, as it was not my absolute favorite of the 3 I tried.

I will have these again, they really are that good, and I would also be very keen to try them in chocolate chip cookies, replacing the choc chips with broken bits of the chocolate bar, mmmmmm.

Great sized bar, a perfect amount for a small treat for myself and hubby to share. I was surprised to read it's only 20% macadamia nuts, as it does feels like there would be more than just 20% worth in the bar.
I didn't find the taste of the chocolate anything amazing, but the good thing about it was that it's not overly sweet (could have been a little sweeter though, but that's just me), and it's also really nice and smooth. The chunks of nuts are the perfect size for the bar.
As for price, at the lower end of $1.75 I can see it being a nice treat every now and then, but I doubt that I would pay more than $2 unless I was buying one to put in a gift basket.

My family was keen to help me review a chocolate bar. My 2 pre-schoolers both enjoyed it simply because it was chocolate. My husband and I enjoyed it for what it was: A gourmet treat.

The bar had lots of tiny pieces on macadamia nuts. I was surprised when I looked at the wrapper later and it was only 20% nuts. I could have sworn it would be more.

The bar was one long semi-cylinder, not divided into bricks like most bars. I thought that would make it difficult to break off pieces to share but even straight from the fridge it was easy to divide up.

The chocolate tasted unlike any chocolate I would usually eat. Perhaps this was because it is made with natural organic ingredients and none of the palm oil or other rubbish we are accustomed to in our more famous chocolate brands. The chocolate was divine. It melted nicely on your tongue. It wasn't overly sweet.

The cost would mean that it isn't a regular treat but would be great in a gift hamper.

Just 8 minutes from packet to plate.

Serve with a tasty tomato pasta sauce and your choice of side dishes.