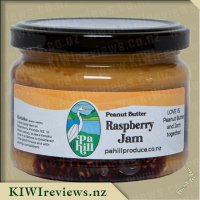 Another favourite, our homemade raspberry jam hand mixed with our handmade peanut butter.

The peanuts we use come from Argentina and are dry roasted to make the perfect texture of peanut butter. Peanut butter madness sets in and we create flavours as peanut butter is a benefit to health and has its uses to flavour and texture in cooking. People love to mix Peanut Butter with a huge variety of flavours.

This simple mixed product looked absolutely lovely to me when it arrived. Great colours and very clearly a mix with the jam at the bottom mostly. I didn't "mix it up" too much other than what naturally happened with the use of knives. The packaging was pretty plain so I had fairly minimal expectations of the taste in advance.

You could taste the simplicity of this combo - it really did taste homemade. It made a great addition to some scones. Additionally the texture was great, not to smooth and not too crunchy and you could see the bits in the jam but it wasn't lumpy.

We had a few folk visiting and staying over Christmas and New Year and they found this a lovely novelty for breakfast which was fun too. We tried it on toast, crumpets, bagels and it was a success for most folk (although there was one request for more jam but I think that might be an individual thing) and most people (5) liked the combination ratio.

I am not really familiar with jam/ peanut butter mixes so it took me a few attempts on toast to get the combination right for me. As a first try I would recommend this product and I am honestly not the biggest peanut butter fan in the world so this was a great combo for me to slide into the concept. I found this a great product and will be trying it again but at $6 it would be a bit of a treat rather than a staple for me. Great for visitors.

Is there anything more classic and well known than peanut butter and jam? They are the perfect duo and prove opposites attract with the bonding of savoury peanut butter and the sweet jam. After having tried the PA Hill cajun peanut butter this was the next one on the list I had to try and boy oh boy I'm glad I did. The Jar is packaged very basically only containing the information needed and not going over the top by over cluttering the item.

You can see the portion of jam sitting at the bottom being surrounded by the peanut butter and I would have preferred it spread throughout more evenly but I can understand that having it separated into two parts it allows you to mix it more to a ratio of jam and peanut butter you would prefer. There wasn't as much jam as I expected there to be as at a guess I would say it was about 80% peanut butter 20% jam but this suited me fine as I'm not very generous with my jam mix anyway but I could see others being upset with that.

As for taste, it was spot on with the savoury saltiness of the peanut butter and the sweet fruity jam. I had the first try of it by itself and then on a white bread sandwich after that I had to try it out in a peanut butter chocolate mug cake and that was absolutely perfect. It is $6 for a 290gram jar and I believe this is definitely great value for money but again if you are absolute peanut butter and jam eating machine then it's going to be more practical to have separate peanut butter and jam jars.

So far I Have had 2 of the peanut butters from Pa Hill Produce and both have been great so I highly recommend them for great quality peanut butters. I will be keeping an eye out for other Pa Hill products and would love to try them. 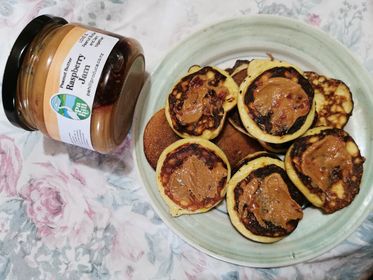 LOVE IS, Peanut Butter and Jam together! At least, that is what the slogan on the jar would have you believe. I have always enjoyed peanut butter with honey, so I was sure this combination would work well. What I had not expected was how pretty the jar looked with the jam and peanut butter marbled around each other rather than simply mixed up. I could actually slide my spoon inside the jar and hook a blob of jam on its own.

We had this for morning tea - we had planned to meet up with friends who have young children, so I thought this would be perfect. I had decided on pikelets as my contribution, but had no wheat flour, so I used almond flour instead. I don't think anyone could tell the difference; they were more interested in the topping. The five-year-old twins adore peanut butter and would cheerfully have polished off the lot if we had not removed the plate. There were two younger children and several adults there as well, and I wanted everyone to try them.

Mr Two loved them. He licked all the topping off and then gave me back the pikelet! That was funny, but it also showed that he approved as he then wanted another one. Miss Three ate hers in two bites and asked for two more (not just one!) so I think she was a fan too. Of course, they could not explain why they liked them but the body language meant they hardly needed to. As for the adults, we all enjoyed them although one person thought the combination of pikelet and peanut butter was a little dry and suggested I use butter as well next time. However he ate several so I don't think the texture put him off too much.

Because the only ingredients are peanut butter and raspberry jam, there is no aftertaste, and there are no added preservatives - just honest foods which are ideal for small children. There is a high fat content, but there is a limit to what you can eat anyway, and with the amount of energy all four of them expend that will do them no harm. Nuts are a great source of protein too, and the children are growing fast so they need that. This mixture is much better for them than jam on its own.

We left the jar with them since the children were enjoying it so much, but my friend phoned me later that evening to tell me the twins had made a cake (with assistance from their father) and had spread it with the last of the contents of the jar instead of using icing. They had been very proud of themselves, and of course she was pleased too because it was a much healthier option. And although it was a slightly messier result, the twins assured her they did not need to wash their hands as they had licked them clean!

WARNING: This food does not LOOK appealing, but the taste is highly customisable and will appeal to anyone who enjoys tuna.