Four Kids and It review 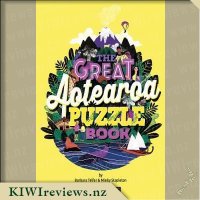 Put your thinking cap on to test your reo and fill your kete with a taonga of knowledge.

Have a great kiwi adventure while solving mazes and crosswords, wrangling word finds and cracking codes.

Crammed full of activities and challenges encompassing all kinds of kiwi trivia, this brand new puzzle book has something for all ages.

The Great Aotearoa Puzzle Book is a great choice for your kiwi kid, with a range of puzzles suited to different ages and abilities it proved to be popular in our household with everyone taking turns at the different puzzles. Although no one in our household has a strong knowledge of Te Reo Maori we do see it as important to our children growing up in New Zealand to have a basic knowledge and we are learning and using basic words where we can.

Our limited knowledge probably showed in some of the puzzles though there is a handy answers section in the back of the book for when you get stuck. I actually thought this was a great way for us to learn new words and with a notes section at the back we found it great to write down the new words we had learned.
The puzzles definitely have different difficulty levels and I think you do need to have some knowledge of Aotearoa including history, famous people, places and general Te Reo Maori to answer some of them so for us beginners some puzzles were very difficult.

Overall it was a great time filler to get the kids off screens and do something that challenged their brains. My 8 year old especially loves puzzle books and really enjoyed using this puzzle book both at home as a rainy day activity and to take in the car to fill in time. The illustrations while not fantastic as colouring pages he also found he could add some colour with his felt pens so liked that this was an option too. Being a small size it is perfect for taking travelling to give the kids something to do on long car trips.

The range of puzzles is great with crosswords, fill in the blanks, some code cracking, wordsearches and matching there were puzzles to suit everyone. This is a great puzzle book with lots of variety and I think in our household we all learnt something new. My kids were quite interested in learning the Te Reo Maori words for place names during Maori language week so particular liked the puzzles learning the place names and from what they had seen during Maori language week aswell were quite good at this so that made me very proud that they are picking up new things.

With Te Wiki o te Reo Maori planned to start shortly, this book could not have been released at a better time. I leafed through it initially, thinking it would be a great way for the younger members of our family to consolidate their knowledge of Te Reo while having lots of fun, and planned to take it round to my daughter's house so they could try it out. Unfortunately for my great idea, we had visitors (two adults and two little boys) and they homed in on it straight away. Apparently, the appeal was not limited to children!

The book was passed around from person to person, allowing all six of us to try a couple of puzzles. I supplied a 6B pencil and an eraser, and there was a great deal of fun as the various options were explored. It soon became apparent that there were different levels of difficulty - Mr Seven gave up on a couple of the puzzles because they were too complicated. His father, on the other hand, managed to complete one of the more difficult ones in record time. And when it came to my turn, I had to resort to the answers (included at the back of the book) to solve the last clue!

After watching everyone in action, I was certain that this was a great way to learn new words and to consolidate those that are familiar. All of us are at different stages on our Reo learning, but not one of us can say that we are word perfect. Learning like this is such fun, and although the puzzles are not dumbed down, they are straightforward enough for anyone to access. It helps if you are a kiwi of course because people from overseas would not understand the Maori words - although they could always use the book as a tool for basic vocabulary learning. Given that all the answers are supplied, this would not be too difficult.

I like the size of the book. It is small and sturdy enough to be taken on a car trip: it would keep younger children amused for hours. (Mr Nine suggested that he be allowed to take it home so he could use it when they go to visit their cousins, who live some distance away.) We did think it would be nice to have a companion book - larger format, with some of the illustrations included as outline drawings so children could work with them once they had finished the puzzles. This would serve as double reinforcement for their learning, and would be more accessible since the illustrations in the book itself are quite dark and not really suitable for colouring in. We also thought it would be nice if a soft pencil with an eraser tip could be included with the book - we had to hunt for a pencil that was right for the job.

We liked the two pages at the end which are reserved for notes. It is always useful to have extra space available for workings; it saves the need for odd pieces of paper for jotting down ideas as they invariably get lost anyway. It was also good to have a simple map of Aotearoa in the end flap - the main places are identified although I would like to have seen a second, more detailed map which features all the place names referred to. The book content includes a variety of items - animals, colours, food, days, seasons, etc - but geography is one of the most important so it would have been good to see some of the rivers and mountains included as well.

Our verdict? A great book for New Zealanders who want to increase their general knowledge and word power in both languages. Lots of fun, and an ideal gift for a birthday or other celebration. Our visitors were impressed. And the book never did make it as far as my daughter's house!

Score: 8.4
Product reviews for listing 5067: The Underland Chronicles 3 - Gregor and the Curse of the Warmbloods -  Written by: Suzanne Collins

Gregor and Boots must return to the Underland to help ward off a plague. It is spreading fast, and when it claims one of Gregor's family, he begins to truly understand his role in the Prophecy of Blood. Gregor must summon all his power to end the biological warfare that threatens the fate of every warmblooded creature.