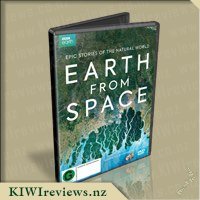 This is your home, as you have never seen it before.

Cameras in space capture natural spectacles on an epic scale and are now so advanced that they can track down individual animals. Cutting-edge technology tells the story of life on Earth from a brand new perspective. Marvel at the dancing neon Northern Lights and the swirling blues of blooming plankton. Zoom in on herds of elephants searching for water, and discover previously unknown colonies of penguins.

Satellites also capture disappearing forests and show cities sprawling over decades. With the Earth's surface changing faster than ever before, can the view from space inspire us to look after our unique and fragile home?

All of us were amazed by the quality of this series. From the very youngest (aged eight) to the very oldest, we were spellbound from start to end. It was useful that the two discs consisted of four separate episodes, each one just under an hour long - the perfect length for a younger child's attention span! The episodes are all G rated, and are eminently suitable for family viewing; while there is a great deal of information which older people will appreciate, the younger ones will delight in the animal photography and brilliant colours of the changing landscape displays.

Each episode has a theme, but there is of course much overlapping of content. The recurring process of the satellite camera homing in on a single animal or plant or geological feature is sheer magic; although modern audiences are used to the fine tuning offered by GOOGLE maps and the whole zoom in/out system, that is a relatively jerky and often pixelated system. This series, however, presents a seamless zoom from full-frontal earth as seen from space via a dizzying journey all the way down to an elephant's nostril or an insect on a flower. The technique used to achieve this required a combination of satellite photos, drone footage, and, more conventionally, movie cameras mounted on dollies or aircraft or simply hand-held. The amount of expertise required to coordinate each shot is beyond imagining. I have every admiration for the film editors working behind the scenes!

The narrative is delivered by Chiwetel Ejiofor, an actor who is very easy to listen to. His voice is not intrusive; it is almost as though he is part of the soundtrack - pleasant, informative, and always appropriate to the scene. All of us felt that we had learned a lot through watching this series; there was neither too much nor too little information, and technical items were explained in everyday language that even the children could understand - and yet, there was no dumbing down. That would have annoyed me!

The first episode sets the scene for the series. "A New Perspective" starts with the words "...from space, the view of our planet is breath-taking". It introduces the concept that the new technology involved in satellite photography has made it possible to see things in their entirety, to track changes, and to solve longstanding mysteries. Only from a bird's eye view can the audience appreciate the outstanding choreography of the Shaolin Kung Fu students or the location of emperor penguins in Antarctica. Meanwhile, the children loved the sequences of the baby elephant and the penguin chicks!

The second episode, "A Patterned Planet", looks at the way that patterns are created by animals and humans, and also by weather events; by recording the same place over a period of time, scientists can understand through the changing pattern lines what has been happening there. Various patterns are created by the effects of wind and rain; seasonal growth; earthquakes and volcanos; they are also formed by animals creating new pathways through vegetation or swampland, or by humans building or deforesting. From space, these changes are incredibly clear. Again, in this episode, the storyline follows half a dozen animal species' lives - fascinating, and great fun to watch.

Episode Three, "A Colourful Planet", highlights the various changing colours of the landscape. Some of these colours occur naturally, as in the Aurora Borealis; others, such as the tulip fields of Holland, are man-made. The bees working a field of rape are just gorgeous, with the closeup lens clearly highlighting the pollen baskets on their legs and the rapid movement of their wings. But the children's favourite was the segment on the Great Barrier Reef, with its myriad wildlife right down to the coral itself. Underwater photography is sometimes difficult to see, but we had no problem this time - the lighting crew had done their job well.

The last episode, "Changing Planet", introduces some of the threats that hang over the Earth: violent storms like Hurricane Harvey, which devastated Texas and Louisiana in 2017; wildfires; global warming; and deforestation. It also referred back to the other three episodes, and offered solutions to some of these issues. The children were fascinated to see first-hand how lightning strikes are responsible for many wildfire outbreaks. Seeing it from above (courtesy of the satellite camera) made it so clear to them. Hurricanes, although not able to be prevented, can also be spotted in advance so that people can be forewarned and build on prior knowledge to minimise fatalities. As for global warning and deforestation, as the children said, it is up to all of us!

Watching this series with a group of interested people made me realise just how far we have come with technology. If humans have caused some of the environmental problems today, the same technology that has helped create those problems can now help to reverse them. And in the meantime, as a result of Earth from Space, all of us have a better understanding of the various creatures and surroundings that we are lucky enough to enjoy - whether in person or virtually, by means of electronic media. It would be interesting to see if a follow-up video is planned in a few years' time to see how much our planet has progressed.

Score: 8.0
Product reviews for listing 6595: Keeping up with the Kaimanawas -  Type of Show: Reality Documentary

Meet the Wilsons; Amanda, Kelly and Vicki - three Kiwi sisters from Northland, who live and breathe horses. They ride them, train them and show them - domesticated or wild.

In this new local or reality series Keeping Up With the Kaimanawas, we follow these fearless and inspiring women, as they go on their wildest ride yet - saving New Zealand's Kaimanawa horses from slaughter and training them for their first ever national Wild ... more...