ProdID: 1808 - No Country for Old Men
Directed by Ethan and Joel Coen 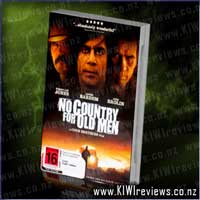 The time is our own, when rustlers have given way to drug runners and small towns have become free-fire zones. The story begins when Llewelyn Moss finds a pickup truck surrounded by a sentry of dead men. A load of heroin and 2 million dollars in cash are still in the back. When Moss takes the money, he sets off a chain reaction of catastrophic violence that not even the law, in the person of aging, disillusioned Sheriff Bell, can contain.

As Moss tries to evade his pursuers - in particular, a mysterious mastermind who flips coins for human lives - the film simultaneously strips down the American crime drama and broadens its concerns to encompass themes as ancient as the Bible and as bloodily contemporary as this morning's headline.

I've tried several times to watch this movie, but have not managed to get more than half way through. Its lack of dialogue and excess of violence failed to engage me despite my best efforts.

Llewelyn Moss (Josh Brolin) is hunting in the west Texas wasteland and stumbles on the grisly scene of a drug deal gone wrong. There he finds two million dollars in cash which he takes and sets off a chain reaction that results in a chase across Texas. This sets the scene for this Academy Award winning (best picture) film from the Coen Brothers whose previous works include Fargo and The Big Lebowski.

The film is set in 1980 and everything looks authentic right down to the look of the characters, how they dress and speak, the sets and vehicles. I didn't notice any outstanding anachronisms.

There are three main actors. Josh Brolin plays Llewelyn Moss. A factory worker, Vietnam veteran and part time hunter whose luck changes for better and worse when he finds a pile of cash near a pile of corpses in the desert. Tommy Lee Jones as Sheriff Ed Tom Bell who has been on the job for many years and is disillusioned by what he sees in the world around him. He is looking for Llewelyn to try to warn him of the danger that is shadowing his every move. Javier Bardem plays his Academy Award winning (best supporting actor) role as Anton Chirgurh, the man hired to recover the money. His performance is brilliant and he portrays one of the best villians in the history of cinema.

When I left the cinema one thing that particually stuck with me was the character of Anton Chirgurh and his performance by Javier Bardem. To say the character is morally bankrupt is wrong. He just has a very different set of morals that are so far beyond what a normal person can comprehend. His actions are very purposeful and never in vain. An unorthadox villian that also uses unorthodox weapons including a suppressed shotgun and an air powered bolt pistol that is normally used for slaughtering cattle. Woody Harrelson gives a fleeting but powerful performance as Carson Wells, a man hired to find the money before Chirgurh. Kelly Macdonald plays Llewelyn's wife Carla Jean who has a very subtle but tough attitude to her that is really good to see from a female actress in this male dominated film.

I love when a movie has great cinematography. 'No Country' has it. The vast openness of west Texas combined with Ed Tom Bell's opening monologue really stood out to me. Each shot is carefully composed and nothing jumped out at me as breaking the style. My hat goes off to the director of photography. Llewelyn running through the desert being pursued by men in an SUV with a storm brewing in the backdrop is one of the most beautiful things I have ever seen in a movie theater.

Something that may put people off is that the ending is unorthodox and is very open to a type of interpretation which most people will not know much about, myself included.

The content of the film in general is dark and not sugar coated. Some of the scenes are substantially graphic and not for children.

Based on the book of the same name by Cormac McCarthy.

In conclusion I will say this is one of those movies you will either love or hate. It will definitely appeal to people who like well made cinema with fine acting performances. Its not an action film but when the action does come its thick and intense.

It was an interesting night, when I sat down to watch this movie. On the couch, with Mince Pie and Coke, just wondering what I was getting myself into.

This movie is very much thought provoking, in the sense that you wonder to yourself "What am I watching?". A few scenes are definitely not for the sensitive type, and some language definitely not suitable to more sensitive ears, this film shifts quickly between a potentially overwhelming plausible reconstruction of the process of Enforcing Texas Law at it's prime, and what can only be described as the masochistic glee of someone who's watched the 'SAW' series.

Not a bad movie, if you're into movies that really make you think, are full of worse than grampa-at-the-dinner-table-bad puns, and running.
Lots of running.

Overall, an interesting movie, I'm not overly motivated to go out of my way to watch it again sometime soon, but the only way to define whether it will motivate you that way, is to go see it yourself.