« The Old Man & the Gun review 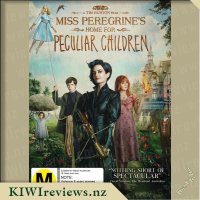 From visionary director Tim Burton, and based upon the best-selling novel, comes an unforgettable motion picture experience.

When Jake discovers clues to a mystery that spans different worlds and times, he finds a magical place known as Miss Peregrine's Home for Peculiar Children. But the mystery and danger deepen as he gets to know the residents and learns about their special powers... and their powerful enemies. Ultimately, Jake discovers that only his own special "peculiarity" can save his new friends.

As soon as I saw the trailer and that Tim Burton was connected I knew I had to watch this, I've never read the books though I may get to that one day, but it had all the right elements for me. I won tickets to the movie premier and took my three kids with me (they were 6, 8 & 10 and I had no clue about the rating but they were all keen), at the end of it I'd enjoyed the film, and my kids had, except for one aspect which involved eyes, that my eldest couldn't stand at all and put him off watching it again but he has recently said he may give it another chance.

I've re-watched the film multiple times since then and have enjoyed it just as much each time. Asa does a great job as Jake, as he learns about the world his grandfather was once involved in and what creatures lurk in the shadows. I simply adore Ava Green, half my motivation for re-watching it is due to her being in it and I love how she portrays Miss Peregrine. The plot moves well and I like the little twists and turns, there's some great drama and the different characters reactions to Jake joining the gang come across as authentic. The special effects are well done, there is a fabulous scene near the end of the film (so I won't go into too much detail) which involves skeletons fighting invisible monsters (which leads to some interesting ways to make them more visible).

I love this film, it is one that I wish would get a sequel just so we could see where everyone ends up.

Score: 9.8
Product reviews for listing 6109: The Wizard of Oz
Directed by: Victor Fleming

This classic 1939 musical fantasy adventure film is the most well-known and loved adaptation of the 1900 novel The Wonderful Wizard of Oz by L. Frank Baum.

Dorothy Gale is swept away to a magical land in a tornado and embarks on a quest to see the Wizard who can help her return home.