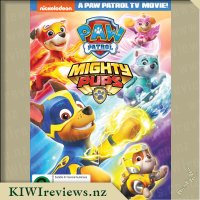 Disclosure StatementFULL DISCLOSURE: A number of units of this product have, at some time, been supplied to KIWIreviews by Universal Pictures NZ or their agents for the purposes of unbiased, independent reviews. No fee was accepted by KIWIreviews or the reviewers themselves - these are genuine, unpaid consumer reviews.
Available:
November 2018

Ryder leads a team of rescue pups (Marshall, Rubble, Chase, Rocky, Zuma and Skye) who save their town from everyday emergencies

In our household we love animated shows, especially our three young children. Over the years there have been several 'favourites' which are just a fleeting memory now, however Paw Patrol has stuck around for several years. Our children are obsessed...not kidding...they have most of the toys and books, nearly all of the DVDs, and then there is the fact the children role play different rescue scenarios (some are quite comical.) When we saw an advertisement on television for a Paw Patrol movie the children were so excited, however we didn't manage to make it to watch the film at the movies. When I saw that Paw Patrol: Mighty Pups was available to request I had my fingers and toes crossed hoping we would be lucky - thankfully we were very lucky.

After school once the children had tidied their toys away, I surprised them with the DVD, their mouth's dropped open and my youngest ran and gave me a hug - I'm going out on a limb here, but I think they were happy hehe. The cover shows the pups in superhero type costumes, and the children were excited to find out what powers each pup had, and how they got them. Turning the DVD case onto the reverse side, there were pictures of each pup and it said what the powers were. I put the DVD in the player and we sat on the couch together to watch.

As soon as the theme song started the children were mesmerized, my eldest son said 'Hey, that's not the normal song.' Initially the movie started just like the normal episodes, the children kept asking why they had no powers, I told them to wait because something would happen soon. On this DVD we are introduced to Harold Humdinger who is Mayor Humdinger's nephew, he too is power hungry like his uncle.
This is the beginning of a super adventure, when the meteor reaches Adventure Bay and gives the Paw Patrol pups and Ryder their mighty powers, unfortunately Harold gets the powers too. The pups have to stop Harold and Mayor Humdinger, and at times like seeing the giant robot, my children were adamemt thePaw Patrol would be defeated this time.

After watching this movie the roleplaying started, Rubble's super strength and Chase's super speed were popular choices. At a running time of 44 minutes this was a reasonable length, especially for my 2 year old who doesn't sit still for long.
With the vibrant, engaging characters and the excitement of the adventures, I highly recommend this to anyone who has younv children, probably in the 2 -6 year old age bracket (however my 7 year old was just as glued to the television.) I look forward to seeing more Paw Patrol adventures in the future, I personally think Paw Patrol is one of the best chlldrens cartoons I have seen for a while.

Score: 9.3
Product reviews for listing 4970: Cosentino: The Magic, The Mystery, The Madness -  Type of Show: Magic

With world-class production values Cosentino takes the audience on a journey of incredible ingenuity, intimate magical mysteries and intense escapes - distorting all you thought was possible for a man to achieve! Featuring the breathtaking illusions The Vault, Crazy Cell, Deja Vu, Split in Two, Training and Breathless in his sold out theatre performance at the revered Regent Theatre, as well as street magic performed in-front of unsuspecting ... more...