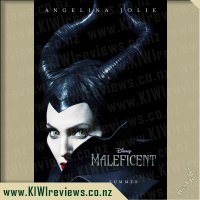 Disclosure StatementFULL DISCLOSURE: A number of units of this product have, at some time, been supplied to KIWIreviews by the company for the purposes of unbiased, independent reviews. No fee was accepted by KIWIreviews or the reviewers themselves - these are genuine, unpaid consumer reviews.
Available:
in cinemas from 29th May 2014

Bent on revenge, Maleficent faces a battle with the invading king's successor and, as a result, places a curse upon his newborn infant Aurora. As the child grows, Maleficent realizes that Aurora holds the key to peace in the kingdom - and perhaps to Maleficent's true happiness as well.

When I think of a magical paradise the Moors is what I envision. A truely spectacular vision of magical beings floating around. I have never seen such amazing footage of fairies, mermaids and other unususal beings. The breathtaking shots blew me out of the water and I found myself saying 'wow this is beautiful' on more than one occasion. Visually this has to be one of the best movies I have ever seen - even the Dragon had me holding my breath. Amazing!!

I have wanted to see this movie for so long - more so because I had read that Angelina and Brads children play parts throughout. I was intriged to see what they would do and was rather excited when I noticed them.

I knew that it was about Sleeping Beauty but being told through Maleficients eyes and was amazed at how much I enjoyed it. I loved watching the hate slowly melt from her heart as she became captivated under Auroas spell. The hate I felt for the king and 'man kind' took over and all I felt was pitty for Maleficient. The 'sleeping beauty' angle is exactly how I was told as a child, but, I can not understand why the king sent her as a baby to live with the fairies when the spell cited on her 16 birthday she would prick her finger, the whole thing seemed some what silly.

We watched last night without the girls just to see if it would be age appropriate for them. I have a three and six year old. I am sure they will love the fairy land and be captivated by it visually. Story wise it has its slow periods and there are also some dark areas but over all I think they should be able to handle it. An amazing story, one of my favourites for Disney.

This is one of those movies that reminds you not to take everything at face value. A story from one perspective is precisely that; one perspective. Disney has finally taken a much needed step back from their "winning" formula for churning out movies, and have discovered that the key to originality and success, is to challenge what already exists.

This is another film that uses female lead characters (another shift in the way Disney usually works), but it goes beyond the characters. This movie creates the world around the original story and provides context to the story that we already know from 'Sleeping Beauty'.

I thoroughly enjoyed this movie. It was a great mix of action, drama, comedy, and fantasy, and the visual aspects were superbly done. I will admit that only one male character was well done, the rest were rather one-dimensional.

I was surprised by how much I enjoyed this film. The predictability of some parts were overshadowed by the action and well-acted portions in other areas. As my flatmate described it, "It' starts off like any other Disney movie, but then it changes into a war story, and then they suddenly remember that its a Disney movie at the end".

All in all, this will certainly be joining my collection at some point.

I love Disney movies and I'm really enjoying all the new twists on classic tales that have started appearing on our screens over the last few years. Sleeping beauty has been one of my favourite movies so I was very excited when Maleficent came out. As soon as I had the chance I headed along to it with my sister and 11year old niece.

Maleficent tells the tale of sleeping beauty from the side of the one who cursed Aurora giving a completely different side of the story. We are also shown the history and background leading up to the curse. While the basis of the traditional story we know and love are there, Aurora is cursed so is then sent away till be protected by three good fairies, the rest of the tale is completely different.

I'm usually not a fan of Angelina Jolie but she plays the role of Maleficent wonderfully. She adds so much depth to the character, she really plays the role well and takes you on a journey of many emotions throughout the movie. She really draws you in and you feel everything she does, I don't think anyone else could of done the character half as well as she did!

I really enjoyed the movie and seeing a complete twist on the traditional story. It was a much darker tale than the traditional but had many wonderful twists and turns throughout the movie. While I wouldn't recommend it for younger children as there are a number of scary moments, my 11 year old niece really enjoyed it. It's a movie that will be added to my collection when it's released on DVD.

While most of us grew up with the story of Sleeping Beauty, our opinions of the story can only be changed by the view from the other side.... Maleficent give us the perspective missing in earlier adaptations and telling of the story. Maleficent tells the tale from a different perspective and makes us understand that there are two sides to every story. It also shows us that acting impulsively can cause everyone to suffer, perhaps, not immediately, but in time...

Our perceptions of right and wrong must be based on the whole and not just one side of the story. Maleficent shows us the innocence of youth and the greed of some and the ultimate outcome of that greed. It shows us that true love can exist and can be found in the most unlikely of places. That small acts of kindness can have far reaching consequences and that those who are hurt can and do react to those that hurt.

On the movie side, Angelina Jolie epitomises the role of Maleficent and the movie is a 'must do' for children and parents alike. There is a quality that will appeal to young and old alike and the special effects don't let you down either. A movie for the whole family, and an afternoon well spent.

We enjoyed chatting about the movie on the way home and the different views that come from the story. We found that we each had differing ideas which we could discuss and expand on.

So you think you know the story of Sleeping Beauty do ya? Well, Disney puts a great twist on what is a classic story that has hardly wavered since first gracing our screens, animated style.

Maleficent is a well love faerie who cares for the woods in which she lives. The humans and the faeries (and other such creatures) keep away from each other until Maleficent meets a human boy, they fall for each other but when his greed to become king takes over all else, his betrayal strikes hard on Maleficent. What follows is a tale of good turned evil, curses, war, revenge, paranoia and ultimately love (but not quite what you might be expecting).

Angelina Jolie is BRILLIANT in her role, I didn't quite like her character at first, but once the ball got rolling, whowzahs! Jolie plays Maleficent with wonderful vulnerability to begin with, evil and malice the next and then a gradual change of mindset as the movie progresses. Fanning is sweet, bubbly and her role is what you expect Aurora to be, kind, loving, happy, naive and pure, she has the power to change hearts and unite worlds.

I really enjoyed the back story to such a well know Disney villain and how much more depth and history the character is given, and I think a much better reason behind her cursing an innocent babe, as not being invited to a party was never a good enough reason in my mind. The special effects are wonderful, we got to see this in 3D and on the IMAX screen and while it took a minute to get used to everything flying in your face it really aided the overall effect, and the dragon in 3D and the final battle, awesome!!!! The creatures were stunning and some of the scenery was stunningly gorgeous.

When I saw Frozen with my kids, and Disney took their tried and true formula and gave it a really good shake up, I has a little bit of hope in the back of my mind that they would continue to do so, and with Maleficent they did not let me down one bit. I can't give away spoilers, but suffice to say that this is a brilliant movie for my daughters to watch as it shows them that they don't need a man to save them, help them etc.

I really enjoyed this movie and there is no doubt at all that I will be owning this when it is released on DVD, none at all.