Home > Categories > Movies > Comedy > The Time of Their Lives review

ProdID: 7816 - The Time of Their Lives
Directed by Roger Goldby 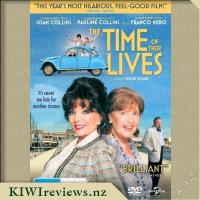 The Time of Their Lives product reviews

Pooling their limited resources, they hit the road together by coach, ferry, car, and foot in a race to get to the funeral on time, becoming embroiled in a romantic triangle with an Italian painter (Franco Nero) along the way. On this unforgettable journey, they find true friendship in one another - and have the time of their lives.

There were echoes of all sorts of other movies in this little gem. The obvious comparison was with Shirley Valentine (which also featured Pauline Collins), but it was also clearly influenced by Thelma and Louise, one of the most well-known buddy movies which featured female protagonists rather than the usual male team. And there were also echoes of Rowan Atkinson (in Mr Bean's Holiday) and Joanna Lumley in some of her best Ab Fab moments - at times, it appeared that Joan Collins was doing a most creative Lumley imitation.

The humorous moments ranged from outrageous black comedy to understated charming moments that caused a smile or two. Although it was billed as a comedy, there were moments of pathos as the back stories of two basically very lonely women unfolded and showed how they eventually came to rely on each other. The music supported their moods, featuring well-known standards, often with accordion accompaniment and French lyrics to help set the scene, and was invariably in the "singalong" style that women of their ages might be expected to have listened and danced to in their youth. The French background is another character in the story, offering a romantic view of escapism and the hope of a happy ending.

Something that impressed me was the way that the actors were all made up to look their age. The DVD cover featured a picture which had been airbrushed, but there were no such concessions in the film itself. All three of the main actors were presented as elderly if reasonably fit people who were determined to enjoy life and do whatever they pleased - even if it was a bit risque! Franco Nero was not concerned about appearing naked onscreen: how many men of his age would be comfortable doing this? And yet it was in context, and he was presented as a vibrant old fellow, wrinkles and all - no apologies for having a body that was well worn!

Old age and its characteristics framed the story. Skin spots, saggy bits, hair loss, other imperfections - all were shown as part of the characters' attributes with no apology offered or indeed needed. The little foibles of each character - Helen's "kleptomania" and limp (which conveniently disappeared from time to time), Priscilla's reluctance to party hard which soon dissolved as she realised she was enjoying herself, and Alberto's indiscriminate amorous advances to anyone who would respond - give an added charm to their performances.

As I speak French, I was not concerned about the number of times the script required the actors to use the language. After all, the film was set in France so it was understandable that some of the dialogue should be in French. However, my friends who were watching it with me kept asking what had just been said. I think there was a case for more subtitles so that the film would be accessible to those who do not necessarily know much French.

Other than the issue with subtitles, we all enjoyed the movie immensely. It would appeal to a wide range of ages because the themes are universal: searching for happiness and taking risks in the process are things that everyone does. Not necessarily in the way the film presents them, but certainly close enough.

In the Year 2027, eighteen years since the last baby was born, disillusioned Theo (Clive Owen) becomes and unlikely champion of the human race when he is asked by his former lover(Julianne Moore) to escort a young pregnant woman out of the country as quickly as possible. In a thrilling race against time, Theo will risk everything to deliver the miracle the whole world had been ... more...