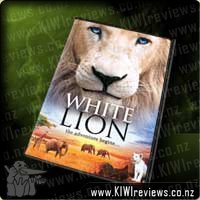 According to the legend of the Shangaan, white lions are the messengers of the gods, but it has been years since one has been seen in their remote African valley. When a white lion is miraculously born into that valley, a young Shangaan named Gisani, finds himself destined to protect this rare and magnificent creature at all costs. This young lion, that will be known as Letsatsi, is cast from his pride and forced to embark upon a perilous journey of survival.

Close to starvation, Letsatsi befriends Nkulu, an older lion and together they learn how to survive in the harsh African wilderness. Gisani, who is watching over Letsatsi, takes a job as a tracker with a local hunter, who has his sights set on leading the hunt for this rare and magnificent white lion. Gisani, guided by fate, believes that he must find a way to prevent this tragedy from happening. When Nkulu is killed by a farmer, Letsatsi is forced once again to survive on his own. After many trials and tribulations he finally learns to hunt by himself and grows into a magnificent adult.

But before he can take over a pride of his own, Letsatsi and Gisani must face their greatest challenge - the trophy hunter - for whom legends are worthless and rare skins priceless.

A beautiful narrative reminiscent of a grown-up version of the Lion King, this story follows the journey of a young white lion, from birth into adulthood and the trials he faces along the way. Watched over by a human boy, Gisani, this story is as engaging and moving as any drama. I greatly appreciated the care and attention to detail with which this film was made. It cannot have been easy to track a particular lion over such huge tracts of land and time.

A beautiful vision of Africa through the eyes of one of its most majestic and endangered animals, White Lion is a film for the whole family. I would recommend parental discretion in showing to very young children as there are some fairly graphic images of the lions feeding and the scene where Nkulu (the White Lion's friend) is killed is very sad.

Overall, I enjoyed the experience offered by this film and appreciate what they are trying to do in promoting conservation of lions. More awareness is certainly needed of the dire situation for lions in Africa and around the world.

While the scenery in "White Lion" is beautiful, and the footage of the majestic white lion, Letsatsi (growing from a tiny, helpless cub to a full grown, stunningly powerful adult King) produces many aww-worthy moments, I had expected more from this movie, especially with the possible relationship between Letsatsi and his Shangaan "guardian", Gisani, that was hinted at on the back. It is definitely still an enjoyable watch, done half as a (very kid-friendly) documentary and half as a legend/story told to a group of children around the camp fire, but it's rather on the quiet side.

Sweet at times (cub with Mum or Dad moments are always enjoyable), sad at times (if you're a softie and cry easily at those sad parts in movies, then keep the box of tissues handy), funny at times (two half grown lions getting up to mischief provides a giggle or two), and even the odd moment of suspense (will he escape or not?) all add up a movie that will keep some youngsters between 4-10 years (and even some adults) interested enough to watch until the end... but if you want a movie with a bit of oomph, then this really isn't a wise choice.

When a boyfriend tricks Lucy (Scarlett Johansson) into delivering a briefcase to a supposed business contact, the once-carefree student is abducted by thugs who intend to turn her into a drug mule. She is surgically implanted with a package containing a powerful chemical, but it leaks into her system, giving her superhuman abilities, including telekinesis and telepathy. With her former captors in pursuit, Lucy seeks out a neurologist (Morgan Freeman), who she hopes will be able to help her.