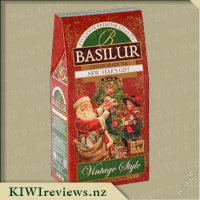 Disclosure StatementFULL DISCLOSURE: A number of units of this product have, at some time, been supplied to KIWIreviews by Basliur Tea or their agents for the purposes of unbiased, independent reviews. No fee was accepted by KIWIreviews or the reviewers themselves - these are genuine, unpaid consumer reviews.
Available:
via online store and at selected quality retail outlets

I wasn't sure what to expect with this tea as I hadn't looked too closely at the packaging. I initially just thought it was black tea in fancy packaging. When I opened the pack though I realised how wrong I was. It was like opening a fruit cake. The most amazing aroma of fruit and cherries and almond I really liked the aroma and still find just the smell of this tea is so warm and lovely. Drinking this tea is like drinking christmas. I made it with a teapot so a little goes a long way making this great value for money. This is the most comforting tea I have ever drunk... Its just like drinking Christmas. I love Christmas so the cherry and almond flavours are just perfect for this time of year. Because it is such a warm comforting drink this tea will be perfect for winter as well.

This tea would make the perfect gift for Christmas especially in a gift basket. But not neccesarily if you don't like almonds as this is definitely a tea that you have to like the flavours of Christmas to be able to enjoy. I can definitely recommend this though if you do and I am very keen to now try the others in this range. Definitely a very pleasant surprise for a black tea. 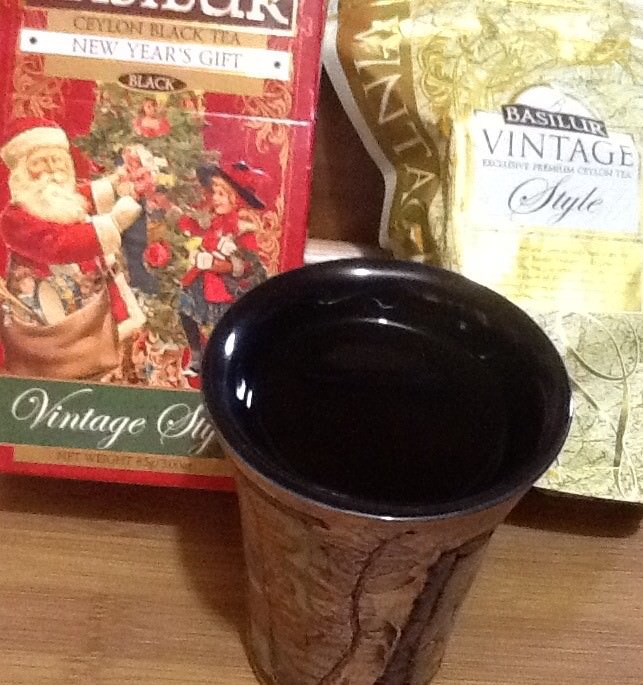 Of all the teas I have tried in this range, this one surprised me the most. I expected a brew tasting of ordinary tea flavoured with spices and fruit, but that was not the case at all. When I first opened the packet I was greeted with the unmistakeable smell of a traditional Christmas pudding, the sort I used to make when my children were small, and my grandmother had made when I was a child myself. That was not totally unexpected as I had checked the ingredients first (using a magnifying glass as the information was so tiny!) and had noted that they included both almonds and cherries.

What I had not expected was that these flavours carried over into the final product so when I took the first mouthful from my cup it was just like drinking liquid Christmas cake! I was so amazed that I roped in a couple of family members to try it with me in case I was just picking up some of the flavours at random. But no - they agreed, and my niece pointed out that she could actually see pieces of real fruit among the tea leaves in the pot.

The three of us thought it was a nice idea for the holiday season as it would be a good hot drink to have with a slice of cake instead of the usual coffee. Although we are all coffee drinkers, we are prepared to try new drinks too and this one has a lot going for it. My niece also liked the packaging as it is resealable so easy to store at a time of year when you don't have time to be hunting for airtight containers to decant everything into.

I made the brews, both the first brew just for myself, and the second which I shared with them, on the weak side as I did not want to overdo the flavours. We agreed that this was probably the best way to have it as it could be too rich if made stronger. There is a natural sweetness in it which is probably due to the cherry content; none of us thought it needed any added sugar, and since none of us takes milk normally that was not an issue. However, I think this is probably a tea that is best drunk black even for someone who normally adds milk as it is quite rich already.

While green tea is normally my preference, I would buy this one too - especially at Christmas time when there is lots of rich baking to accompany it. And it would make a wonderful gift for someone, given that the festive outer wrap is so attractive.

My husband is the tea connoisseur in our house, with me being a total coffee fan, so he was very happy to receive something to try from our latest KIWIreviews box. This review is based on what he commented about the tea, what I tasted in my cup that I tried and also smelled while it was steeping.

With the silly season of Christmas nearly upon on, and teachers and grandparents to buy for, I am always on the lookout for nice yet different gifts. The box is very Christmas-y, and so nice - I kind of feel it would be a shame to cover it with wrapping - a really nice ribbon would be lovely!! The box itself is very easy to open, and reveals the foil wrapped tea - sealing in the freshness - excellent!

Opening the tea it smells amazing - I first detected traces of almond and cherry - and I immediately thought of Christmas cake and cooking in my Grandma's kitchen. Brewing it up was easy - I opted to use a single serve tea strainer - which gave me the idea that the Basilur New Year's Gift Tea, a strainer, a mug and maybe some handmade biscuits would be a lovely present to receive. Back to the brewing, it was easy, and as the tea steeped the flavours smelled stronger and even nicer, if that is possible! It is possible that you could drink this tea without milk - but I opted to add milk.

It is a lovely sweet tasting tea, with flavour that lingers in your mouth. The only downside to this tea is that the flavour is a little on the light side, rather than the full body and flavour of other teas that I am used to. You can get round this though - by adding more of the tea to your strainer, but, then you go through it a lot faster - however, tea strength is really up the individual, so there is no real way to cater to everyones taste!

This is a lovely tea, and my husband is very keen to try all the other flavours, so I think I may know just what to get him for Christmas! Shhhhhh... do not go and tell him!!

Back in the day a few thirst Englishmen got into the habit of raiding orchards for fruit to brew their cider. The sneaky buggers called their missions "Scrumping" and the resulting drop "Scrumpy".

Today we don't nick the fruit, but the spirit and passion of scrumping still lives on.