Disclosure StatementFULL DISCLOSURE: A number of units of this product have, at some time, been supplied to KIWIreviews by Basliur Tea or their agents for the purposes of unbiased, independent reviews. No fee was accepted by KIWIreviews or the reviewers themselves - these are genuine, unpaid consumer reviews.
Available:
via online store and selected quality retail outlets

I love teas in all sorts of flavours and ways to brew tea, I really wondered what exactly Christmas Tree Tea would taste like. My inner child was really excited to see the box as it is so cute but I did struggle with the information on the box, the print size is far too small to read but I did manage to see the little pictures at the bottom of the side panel that was a guide to how to brew a "perfect cup of tea".

I eagerly opened the box and was delighted by the foil pack as it can be resealed to keep the tea fresh, I wasn't having a good day with my sinus so battled to get a good sniff but from what I could smell it was pleasant enough. I brewed a pot of tea and offered to have my parents join me in a taste test. My dad said he thinks it would taste better if left to brew for a bit longer and my mum said she wasn't too sure about it, but neither of them love flavour teas as they both tend to stick to regular tea. I had a sip and although the flavour was mild it was pleasant but I was curious to know what it would taste like if left to brew for a bit longer so the next pot I poured my mums early as she doesn't' drink strong tea and left mine and my dads for a few more minutes, big mistake... I hated it as it was now rather bitter and my dad said it was still missing something.

I notice that there are other flavours in this range so might give them a go but I wouldn't really worry about this one again, it was pleasant enough but there are other teas I enjoy more, although it is great to experiment and broaden my tastes. 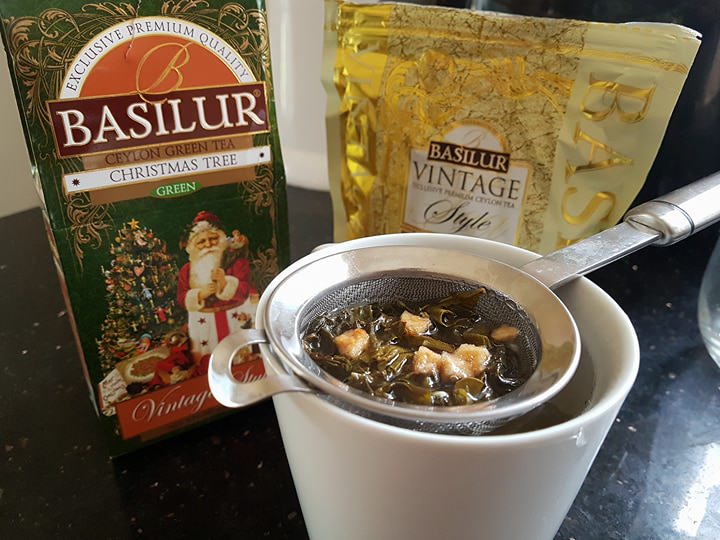 What does a Christmas tree taste like? That was the question that ran through my head when I saw the name of this tea flavour. Apple, cherry, mango, and passionfruit apparently is the answer, according to the packet (along with cornflour...?) The packet comes in a lovely traditional style Christmas packet; dark green, deep red, and gold, with some embossing too. It has a tear tab, which is less than easy to open. In fact, I almost tore the box in half trying to neatly tear the box at the seam. Luckily, the tea itself comes in a beautiful pale yellow and gold resealable foil packet inside the box.

The extravagant look of the inner packet puts the outer packet to shame, and when you open it, the aroma of the tea leaves puts the inner packet to shame too. The tea is extremely aromatic, with large tea leaves and chunks of fruit, the mango and passionfruit combining to create an almost apricot scent. While the tea has large chunks, there are still fine particles that will make it through the average tea strainer/infusers. Once you've steeped your tea, you can even eat the fruit chunks if you feel like it.

As with most green teas, the smell is much stronger than the flavour, but this is potentially the strongest and most authentic scented tea I have come across. The actual fruit pieces add to the flavour substantially, and while it does not match the strength of the aroma, the flavour is still stronger than other teas on the market. Despite me using the word "strong" a lot, this tea is light and doesn't get very bitter if you steep the tea for too long. A tasty beverage without bitterness, that has a high price tag (compared to your prepackaged teas) but provides you with enough volume and quality to balance out that cost.

I am one of those people who embrace all things Christmas, I love everything about the season, and when I saw this 'Christmas tree, vintage style' Christmas tea, I simply had to try it! I have been consuming herbal teas for the last two years, so I am still experimenting with flavours, and experiencing all that herbal teas have to offer. The tea was chosen purely on its packaging, and I was pleasantly surprised when I read the packaging to see it contained, Cherry, apple, mango and passionfruit, a delightful blend of some of my favourite flavours.

I read on and had to chuckle a little at the description, "this tea brings alive the stories of ancient times, the historic flavours of festivities which were told in Christmas fairy-tales. Be enchanted as you savour a cup of this magical, festive Christmas tea". Magic tea - I was really excited to try this now! This tea is a loose-leaf blend, so I pulled out my trusty tea pot, and tea strainer, I found some cups and saucers, and I must admit the ritual of tea making, and using my cups and saucers added a special element to my tea drinking time.

The tea itself is truly delightful, real ingredients are used, and as the hot water seeps into the leaves they hydrate, and the flavour is released, it has a sweet smell, and a layered flavour, that is refreshing and enjoyable. I have a few friends who have been dedicated herbal tea drinkers for years, so I invited them for a cuppa and they took turns dissecting the ingredients that were within their brew. They enjoyed it so much that I purchased a box for them for Christmas, but, I hope that this blend is not a limited edition but something that will be available all year round!

I think this tea would make a fabulous gift for any tea drinker, or something to purchase for yourself if you enjoy a cup of tea, and the packaging is just stunning, it has clear instructions on how to make the perfect cup of tea, and I also found that their is a QR code, on the packaging that takes you straight to the Basilurtea website, which was quite an informative read. 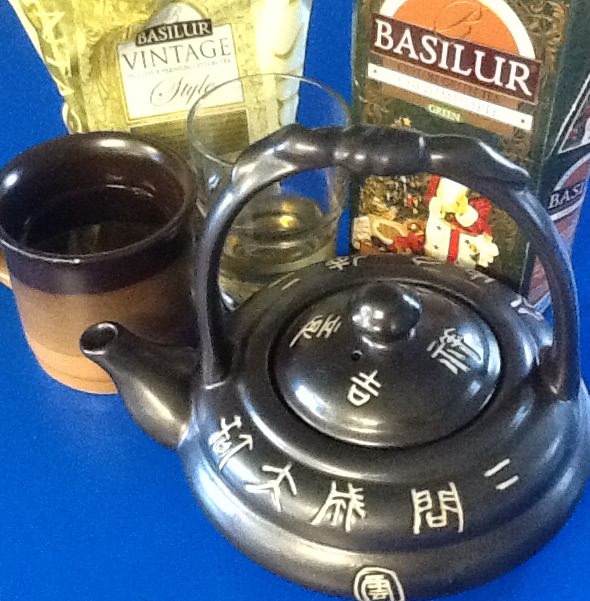 I brought this pack to work with me as several of my friends enjoy green tea, especially if it is flavoured with other goodies, so I figured they would like to try it. It was an unqualified success. I made it reasonably weak as none of them like a strong brew, and served it for morning tea with some plain biscuits. It went down a treat - everyone loved it so much that I had to make a second brew.

The comments on the aroma were interesting. I had several people ask if it contained flowers as they thought they could detect a floral bouquet when they sniffed the pack contents, but once the boiling water had been added, they revised their opinion. I knew what was in it of course because I had read the label, but I wanted to see their reactions before I told them. Interestingly, once they tasted the product as opposed to just sniffing it, they recognised the peach and passionfruit flavours straight away.

We were all intrigued by the appearance of the leaves after the brew had been sitting for a little while. The reconstituted leaves were huge and looked almost good enough to eat. In fact, I did try one just to see what would happen, but the flavour had already leached out into the liquid so there was not enough left for me to judge.

Everyone loved the pack with its resealable inner. Two of them had already tried another drink in the range and said they preferred the taste of this one but they could not decide which packet was the more attractive as they liked both of them. However, they were unanimous about the way the packet could be resealed as this saves the effort of decanting the tea into another container so it does not lose its strength.

Next day I made another brew (as promised!) but this time I made it early and let it go cold before serving it. This was an interesting variation: I think I liked the cold version even better than the hot drink. I had brought some limes and tangelos from home and sliced them finely before adding them to the jug with some ice cubes, and that was a clear winner. Even when I told them the price nobody was fazed: they all thought it was worth paying that kind of money to get a quality drink, and because you did not need much it would go a long way.

Will I buy it again? Absolutely, and I think my fellow tasters will be looking out for it too when they do their shopping for the holiday. There are not many times that I try out a review product on a group of people who give it the unanimous thumbs up, but this was one of those occasions.

Take a gulp. It's Diet. Crazy, right? That's the cool thing about Snapple diet teas - they're made from the best stuff on earth. Natural fruit flavours. Tea from natural green and black tea leaves, with the sweetness you'd expect from us and only 5 calories. So go ahead... take five gulps!