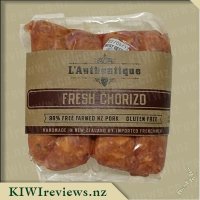 Disclosure StatementFULL DISCLOSURE: A number of units of this product have, at some time, been supplied to KIWIreviews by L'Authentique Charcuterie or their agents for the purposes of unbiased, independent reviews. No fee was accepted by KIWIreviews or the reviewers themselves - these are genuine, unpaid consumer reviews.
Available:
at selected retail outlets

Our products use fresh free-range meat and produce, free from preservatives, gluten, starch and flour. This simplicity, and careful seasoning lets flavours shine, and with slow cooking the juices explode in your mouth. We also use natural casings, because it doesn't make sense to wrap something so good in something artificial. There are four main types of Chorizo I have come across - those that try to melt you from the inside out, those that are so "smokey" flavoured they may as well have arrived in an ashtray, those that have basically no flavour at all, and the rarest group is "those that are so well balanced, they actually taste good."

These fall firmly into that last category.

From the moment I opened the packet and smelled the wonderful scent of fresh meat, herbs, spices and "no fillers" (Yes, after a while, the lack of fillers is a smell you can detect) I knew I was in for a wonderful meal. Not wanting to drown out the flavours, nor lose any, I planned a simple meal of Chorizo and Smashed Potatoes. According to the YouTube clip on the company website, the way to really cook these properly is to pull them out of the fridge and let them stand for half an hour. This allows the meat to relax and come up to room temperature, because chilled meat is firm and tight, ,not allowing heat to move freely through the meat and keeping the filling tense means squeezing out all the moisture. No-one likes a dry, chewy sausage.

Pre-heating the frying pan, and dropping in a little rice bran oil, I fried the sausages for 2-3 minutes then turned them, and repeated that process for about 10 minutes. The result was beautifully browned sausages that still held in most of the moisture. Naturally, some of the oil from the meat and spices leaked out, so after decanting the snagglers onto a plate and covering with some tinfoil, I dropped some butter in the pan and threw in a splash of Garlic Sauce and a few drops of extra-spice Ghost Pepper BBQ sauce, and finally the par-boiled spuds which I then squashed. Frying them until golden on both side, it was time to plate it all up.

The smells were driving be mad with hunger, so I didn't bother to do anything fancy in the way of plating - as you can see - but the proof was in the eating... and the eating was good! The sausages were perfectly balanced - enough spiciness to be a chorizo but not so spicy as to be uncomfortable to eat. That said, the average Kiwi palate is notoriously sensitive to spice, so some people who have a very low tolerance will likely find these quite zingy. Those who can eat a jalapeno without flinching will likely find these "quiet"... so be aware of your own tolerance for piquancy and decide carefully.

Overall,, this was a great way for me to test these sausages, because frying the smashed spuds in the residual oils allowed me to recapture that potentially-lost flavour and keep it in the meal. The sausages retained plenty of flavour and were a real treat to eat - being real meat and no fillers, it felt like I was eating soft, spicy steak and not something that could be equally useful as a draft-filler like some pre-cooked sausages you buy in the supermarkets. Worth every penny, these are slightly more expensive than supermarket or even butcher-bought sausages due to the lack of value-stretching fillers such as breadcrumbs or wheatmeal... so don't be put off buying them - quality over quantity, and quality costs. In this case, you certainly ARE getting everything you pay for.

The Original Meaty Bite, coated in a super crispy batter.