« The World of Ptaavs review 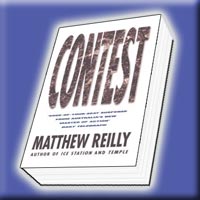 The New York Sate Library. A brooding labyrinth of towering bookcases, narrow aisles and spiralling staircases. For Doctor Stephen Swain and his daughter, Holly, it is the site of a nightmare. For one night this historic building is to be the venue for a contest. A contest in which Swain is to compete - whether he likes it or not.

The rules are simple. Seven contestants will enter. Only one will leave. With his daughter in his arms, Swain is plunged into a terrifying fight for survival. He can choose to run, to hide or to fight - but if he wants to live, he has to win. For in this contest, unless you leave as the victor, you do not leave at all.

The first of now eight books written by Matthew Reilly is awesome. Not really well known as an author until his second book ICE STATION had been released, this book then became a best seller, and I can understand why.
A great book with a thrilling plot taking the reader on an interstellar flight of fancy as we get introduced to other creatures from over the galaxy.
Definitely worth the $24.99 I paid for it, this book kept me enthralled for the seven hours it took me to read. The realism is way off the scope for a Matthew Reilly read, but, nonetheless still kept me hooked.
It takes a really good book for me to go without noticing my hunger pangs, but this book succeeded in withdrawing me from all forms of reality, and real life happenings, until i made myself late for work today trying to finish the last few pages.
As Matthew Reilly says, You only get one first book, and for a relatively unknown Australian author, it was a stunner.

This book was the first book by this author that I have read. And I am sorry to say that though I thought it was a good flick-thru read, it did not impress me much. It was obviously and early entry into the world of Fantasy authoring.

His later books have received rave reviews, however I don't think I will be reading much of them. Not willing to risk the money after this one.

Let's run through the review points:
Value for Money:
It's a good sized book, and you can pick it up at a 2nd hand bookstore for only a few dollars... which is a good price for this one.

Level of Realism:
Pretty low. Interesting, but stilted and a lot of connections were assumed, but not explained.

Re-Readability:
Nah. Not much chance of me getting THAT bored any time soon, and even if I do, I have plenty of others I would re-read first.

Lose Track of Time:
Sortof a bit misleading really, because I plowed into this one fairly hard... simply to get through it so I could move on to something better.

Two princes, each an heir to a faerie kingdom, set off to find two faerie brides. Before long, they meet two lovely princesses and believe their search is over. But alas, one sister becomes jealous of the other, and casts a wicked spell upon her. The princes' wedding plans are thrown into disarray, and one prince seems set to lose his kingdom . . .