ProdID: 743 - Dancing with Cranes: On location with a New Zealand wildlife film-maker -  Written by Alison Ballance 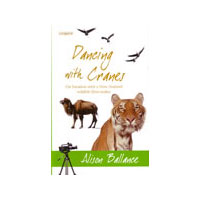 Disclosure StatementFULL DISCLOSURE: A number of units of this product have, at some time, been supplied to KIWIreviews by Longacre Press or their agents for the purposes of unbiased, independent reviews. No fee was accepted by KIWIreviews or the reviewers themselves - these are genuine, unpaid consumer reviews.

Dancing with Cranes: On location with a New Zealand wildlife film-maker product reviews

Working for TV production company Natural History New Zealand, her search for tigers has taken her to Thailand's steamy jungle and the Russian Far East in winter. Propelled by a passion for observing and sharing the wonder and the plight of the animal world, Ballance has journeyed into the wilds, and to sanctuaries where fragile hope for species has been rekindled.

Dispelling myths of film-industry glamour, Ballance's experiences range through uncomfortable and heartbreaking to absurd. Her story also captures the joy and elation of discovery. Whether she's nose to beak with a kakapo or riding a Bactrian camel in the Gobi Desert, travels with this winsome wildlife film-maker are captivating, exhilarating and inspiring.

Allison Balance's very readable and humorous book of her adventures as a wildlife film-maker holds appeal in such different areas as travel, wildlife, and film-making.

She gives the reader an armchair traveller's glimpse of parts of Mongolia, India, and New Zealand. The details of the animals, lifestyles and customs in Mongolia and India were very interesting and informative, and a nice contrast with the more familiar section on the kakapo in New Zealand.

Never again will I think of wildlife film-making as glamorous! Well, I still do, but I now have an idea of the huge amounts of time spent waiting for those interesting, glamorous moments to happen. If that wasn't enough, there's the frustration of never before seem moments finally happening but just off camera (repeatedly!), as in the scenes with the nocturnal cameras set up to try and capture kakapo mating. Behind the scenes frustrations are common as well and are humorously captured by the author. E.g. car troubles in the Mongolian desert. Successes are captured passionately and joyfully.

It would be interesting to see the films Allison and her teams worked on in this book. There are two sets of photograph inserts though, so we can see some of the animals filmed and put a face to the Mongolian support team and others that we meet in the book.

A super puzzle adventure comic starring Von Doogan ... and you!

The curse of the golden monkey is both a brilliant puzzle book and a thrilling adventure story!

It's jam-packed with challenges for you to solve, and every step of the way our hero's fate is in your hands!

Can Doogan uncover the mysterious and terrifying secrets at the heart of Javasu Island? It's up to you!