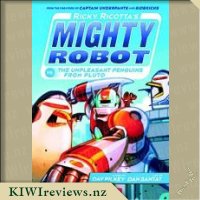 Ricky and his Mighty Robot have made a mess. They've been mean to Cousin Lucy, and now they must make it up to her. But their surprise present for Lucy turns into a trap when President Penguin from Pluto plots to take over Earth. Can Ricky, Lucy and their friends defeat this tiny terror and keep Squeakyville safe?

Ricky Riccotta's Mighty Robot was the first chapter book that my son started reading independently and he still loves them now even though they are way below his reading level. This is book 9 in the series but don't let that put you off as it can be read as a stand alone book. In this story Ricky and his mighty robot face off against President Penguin and his goonies. President Penguin takes offence at the fact that the humans have decided that Pluto is no longer a planet - I found this to be particularly amusing.

My son and I really enjoyed this book as it was a little bit different to the other books in the series with a few little twists to keep things interesting. The story is fast paced and action packed, suitable for both boys and girls. It makes a really good first chapter book with lots of bright and bold illustrations and a few simple sentences on each page. The inclusion of comic book style pages is really fun, as well as the flip-o-rama which features in all of the books.

We couldn't help but notice that near the end the Squeakyville jail is labeled as under construction so I'm hopeful that there are more Ricky Riccotta books to come.

This book was designed for younger children, but when I settled down to read it with Mr Six, we were joined by his 11-year-old cousin who decided it sounded too interesting to miss! The boys sat one on each side of me, trying to be quiet while they listened, but the wacky humour was too much for them. First Mr Six got the giggles, then Mr 11 joined in. This book was going to be a success!

Mr Six thought the idea of turning a swimming pond into a pink bubble bath was too gross to contemplate, and if anyone he knew did that he would have a hard time to stop himself from saying something rude! Mr 11 enjoyed the way that President Penguin's guards were not very bright and were hardly equipped to protect him. Both of them liked the mini comics which provided a break from plain text, and they had a lot of fun with the Flip-O-Rama pages. It is amazing how much of a story can be conveyed without words when the illustrations are so clearly presented.

As an adult, I appreciated the inclusion of the odd learning opportunity because it is important that children get good messages from the books they read. The relationship between Ricky and his cousin Lucy appeared to be in trouble because of Lucy's annoying ways and Ricky's refusal to play with her as a result. Over the course of the story, they learned to sort out their differences and ended up as good friends who were always there for each other,

There is also a reference to Pluto and its downgrading from planet status to a "Gassy Ice Dwarf". The Plutonians are so angry about this discovery that they are ready to invade Earth and make things very unpleasant for everyone there. The reason for this is that the Earth scientists have disregarded their home planet; the main storyline is about this invasion and how the earthlings of Squeakyville respond.

I asked the boys if there was anything they did NOT like about the book. Mr Six said he loved it and was going to read it again on his own. Mr 11 said he would probably read it again too because the humour was on his wavelength! Altogether a positive response.

How do you outwit a Twit? Mr. and Mrs. Twit are the smelliest, ugliest people in the world. They hate everything - except playing mean jokes on each other, catching innocent birds to put in their Bird Pies, and making their caged monkeys, the Muggle-Wumps, stand on their heads all day. But the Muggle-Wumps have had enough. They don't just want out, they want revenge.

Roald Dahl, the best-loved of children's writers, was born ... more...