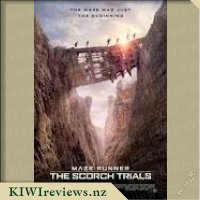 Based on the Book by James Dashner, the second segment of the Maze Runner books.

In this next chapter of the epic "Maze Runner" saga, Thomas (Dylan O'Brien) and his fellow Gladers face their greatest challenge yet: searching for clues about the mysterious and powerful organization known as WCKD.

Their journey takes them to the Scorch, a desolate landscape filled with unimaginable obstacles. Teaming up with resistance fighters, the Gladers take on WCKD's vastly superior forces and uncover its shocking plans for them all.

I seem to have a love/hate relationship with this series. I first watched the Maze Runner and absolutely hated it, thought what a stupid story and terrible acting. I then had to review the second book The Scorch Trials and found I really enjoyed it, although it did not answer a lot of my questions so read the first book of the series the Maze Runner and followed up by The Death Cure where I finally received some of the answers that I required. I had been really exicted to watch this movie and was again let down. I rewatched the Maze Runner before watching this movie just to freshen things up and found the second time was 'not that bad'.

First of all, I usually find reading a book before watching the movie is helpful as the movies seem to explain everything just that little bit better (usually) and add elements in to help it along. However, with this movie they only took parts out of the book and used them when they felt like it, adding characters in and situations which never occured in the book. I understand you need to do that sometimes to carry the story but I found it wrecked it. I don't get why they could not follow the book as it was written instead of the dribble they offered.

I found the action scenes where good and the Cranks were really well done, just differing a little from how I pictured them. But the story was a little patchy and added more 'maze victims' was uncalled for. I found it rather long and drawn out in places and I found the characters really bland and were not drawn to any of them pactically, honestly by the end of it I could not care who lived and died. They have differed from the book quite a bit so unsure what will happen in the third movie, now not due till late 2018 due to Dylans accident (but I do not find him a great actor so I think they should just replace him).

Basically if you have read the books - forget practically everything that you have read. If you have not, then like my husband you will probably take it at face value and enjoy it. But for me, having read the three books - I was not impressed at all. Especially considering how remarkable special effects are now these days they could of made an amazing movies especially during the weather shots.

The daylight can burn you, but the darkness will kill you. From the mind of the writer of The Fugitive comes the pulse-pounding sci-fi thriller, Pitch Black. Experience the psychological terror when a group of marooned passengers must face a pack of terrifying creatures whose only weakness is the light. With little power and dwindling numbers, the doomed passengers turn to a vicious convict (Vin Diesel) with an appetite for destruction and eerie eyes that can guide them through the darkness.