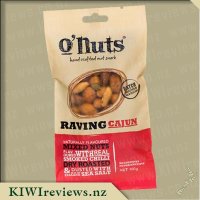 Like your nuts with a spicy kick? Our Raving Cajun blend of almonds, pumpkin seeds and crunchy-coated peanuts is flavoured with real smoked chili and New Zealand sea salt. This is the second O'Nuts product I have reviewed, and it was as good as, if not better than, the first one. The word Cajun to me is reminiscent of Creole cuisine, New Orleans jazz music, bayous ... I could really get carried away on the strength of that one word! However, the nuts were demanding to be tasted, not serenaded, so I tried a few. Delicious! I was a third of the way through the packet before I remembered I was intending to try them out with the meal I was planning and immediately stopped snacking.

Inspired by the name, I had planned to make my version of jambalaya, a spicy alternative to Oriental fried rice. The key ingredients of jambalaya (which apparently just means "jumbled") consist of rice, spicy sausage, fish, corn, and other spices. Other items can be added if you wish. I was going to substitute the Cajun nuts for the sausage as I thought the crunchy texture would be really palatable with the mix.

Having cooked the rest of the jambalaya and mixed it well, I added the nuts just before serving so that they sat on the top and did not get a chance to heat through and go soft. They looked good and they tasted even better - it was certainly a great alternative to just eating them straight out of the packet.

Everyone enjoyed the meal, commenting that the nuts were the perfect accompaniment and, although they were not too spicy, they were certainly full of flavour and most enjoyable. Because they are dry roasted, they are not as fatty as the traditional sausage would be. The special coating on the peanuts was especially popular as were the pumpkin seeds. While the nuts were found to be the perfect partner for the jambalaya, people also agreed with me that a packet would be nice on its own with a long drink (maybe a chilled beer or a coke). Next time I will just buy two packets!

I was hoping that I could eat these because I do like a spicy treat now and again, but sadly my dentures told me pretty quick that I was going to have to hand these over to one of my tamariki and do a review based on his impressions. Stupid idea, because the only one who was willing to give them a try is not exactly good with his words. After 10 minutes of chewing, the best the lad could come up with was "Chur, Koro. You get some good kai to try eh."

After nearly an hour of asking him all sorts of questions, I finally had enough in between the grunts, shrugs, nods and confused looks to get a decent review sorted out. So here goes.

The mix of nuts is good, though he seemed to think there should be lots more crunchy peanuts and get bigger pumpkin seeds. Less salt needed, because they tasted really salty to him, and I have to agree from my limited taste test too. More spice would be good but might reduce the appeal for the timid eaters out there. The almonds are good, but quite hard on the teeth if you get too many in your mouth at once, so maybe swapping them out for cashews or something a bit softer maybe.

The bag is a good size, but is gone all too quickly. Bigger bags would be great for those big snackers or for sharing between more than 2 people. I watched him shovel this bag into his mouth over the span of 5 minutes of actual eating, but a 15 minute period overall because of me rudely interrupting him to try and get information out of him before he ate the lot and disappeared. He loves using his mouth, but hates using his brain.

I think I agree with most of his points, especially with the need for an alternative mix of softer nuts. The flavour was spot on for me, maybe a little quieter than I hoped with a name like "Ravin' Cajun" which says "hot, spicy, powerful" to me. Would I buy them again? Not for me, but I do think they are good value. There's nothing wrong with the product, the issue is my old, shrunken gums and outdated dentures.

These were incredible. I love spicy snacks when I am blobbing out on the couch watching sport so plain popcorn and chips are not my snack of choice. I usually make up something spicy but if I am in the mood to have finger-food I normally do popcorn that I pop in chilli butter and I toss some cayenne pepper through it before I start to eat. Because these sounded like a nice spicy snack, and the sample was free, I thought I would give it a go and see what they were like. Nothing to lose, after all.

First thing I noticed was the bag - not resealable. I thought that was a bit naff really, until I took my first taste, then I realised a resealable bag would be a waste because these wouldn't last long enough to need being sealed away again. You open this bag, you're either going to eat the lot in one sitting, or be handing it over to someone else to eat for you. Love it or hate it kind of thing. I loved it. So, yeah, one empty bag later and I was still wanting more.

I liked the see through panel on the front, so you know exactly what you are getting. No fancy photoshoped images of some magical mix, just what you see is what you get. So I was surprised to not see any pumpkin seeds in the mix. Turns out they settle at the bottom of the bag. No issues with that myself, they are small so they settle. Just the way this stuff happens.

Loved the crispy peanuts, and really want to know what that crispy shell is because it tasted so good, like some spicy batter that's been fried on or something. If they did a bigger bag of just these with the spicy Cajun flavour, I'd buy them in bulk.

Took these to work the other day because I needed to eat them up. Figured if I didn't like them then someone at work would take them off my hands and I could use their opinions to write the review. I shouldn't have worried. The first handful I grabbed was mostly peanuts and almonds, and they tasted pretty amazing. I liked that there was a mix of plain peanuts and the crispy coated ones because it was almost like having an extra nut variety in there too.

Something I noticed as I got down the bag was the pumpkin seeds are pretty small and settle to the bottom of the bag along with most of the loose seasoning, so you start off with a really mild snack that turns spicy when you are nearly done. I wasn't too sure about this eh. I don't know how you could do it, but finding some way to make the mix a bit more even and keep more of the spices on the nuts would be brilliant. That would even it all out and you wouldn't start with thinking "so where is this spiciness then?" then hit "Damn, nearly finished." before you got hit with the sudden "Holy hanna, that's spicy!"

Yeah, I think I'll be looking out for these in the supermarket, because I'm gonna want to take these to work for mid-shift snacks more often. They were great to keep in my pocket and grab a pinch of every now and then while working, to help keep my energy up. Working the road crews can be tough work at times and I read somewhere that nuts give you slow burning energy that lasts longer. Right up my alley!

I think the 'O' in the name stands for "OH MY GOD" because that was my reaction after the first few mouthfuls of these nuts. OK, technically speaking, the only 'nuts' in the bag are Almonds, Peanuts being legumes and Pumpkin seeds... well, seeds obviously. Still... the flavour was amazing.

I like spicy food, and these had a bit of kick to them alright, but it was a quiet kick, that built up only if I scoffed them too quickly. Which I did. Despite tender teeth. And I paid for my indulgence but it was so very, very worth it. I don't know what the coating on the peanuts is, but it gave them a crisp, crunchy shell akin to Peanut M&Ms. If this pack had contained plain, uncoated peanuts I doubt I would have found it so appealing. I am also a fan of roasted pumpkin seeds so these were a great addition as far as I am concerned.

The portion size was good, but frankly, I could have easily handled a pack twice this size without blinking. These packs are only 100g, but I would love to see these available in 200g or even 250g bags as well. Oh, who am I kidding, gimme the 1kg bags, baby! A couple of beers and a huge bowl of these, and I'm set for the evening.

If you open the bag at home and pour them into a small ziplock bag, these would be an ideal snack for going to the movies. Sure, they are a little noisy, but since almost everyone deems it acceptable to talk throughout the movie, and with the traditional crinkle of plastic bags of chips and the slurps from cups of fizzy... who's going to notice some discrete crunching?!

Overall, a stunning addition to the range of yummy snacks available out there. My only tiny gripe is that I feel the price point is a little steep for the quantity I would want to buy on a regular basis.

From packet to ready-to-eat in as little as 3 minutes.

Add your own ingredients, or serve as a quick side dish.

Can be cooked on stove-top or in a microwave oven.