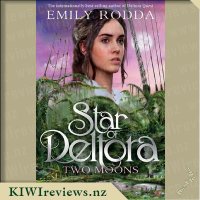 Going on a Kiwi Holiday
Rating: 9.9

This book starts with a vivid description of an island paradise, setting the scene for the reader, an echo of the first book, and it takes us back to the king. The king who watches Britta from afar as she is his daughter. A sense of danger is alluded too as the king's vision of his daughter is seen by those who shouldn't have viewed it, and the king is worried about the consequences for his daughter.

Britta however is on the boat, along with her rivals who are competing for a place as the apprentice on the trader ship Rosalyn. Britta has a quick mind and is not only committed to securing the place on the ship, but she undertakes to learn a little more about her father. The competition for the apprenticeship is no longer, 'clean' and then there is not only her rivals to worry about there is some magic surrounding Britta, and it is not working to support her.

This book is well written, as a reader there is that compulsion to read the next page and the next, and I am keen to read the third book and 'finish' the trilogy. I find the writing a good balance of engaging and rich in context. I also think it's wonderful that the female lead in the story is portrayed as being capable, competent and able to think on her feet. As a reader I also like the message of 'trading' that is woven throughout the story, this is something of a lost art in today's society.

I would recommend these books to anyone who enjoyed the Harry Potter or Percy Jackson series, they have the same fast paced engaging context. This series captures that same essence of a book that will be read again and again, and become a well-worn favourite.

Reading Star of Deltora book one was my first introduction to Emily Rodda and I am sitting her wishing I had discovered her a lot sooner. She is an author who has quickly won my heart with her magical way of story telling she has a wonderful way of pulling you in and making you lose yourself in her books. After finishing Star of Deltora book 1 she left me wanting more, I had to start Two Moons straight away. Right from chapter one it was clear the book wasn't going down until it was finished. My husband tried talking to me about halfway through and had to pry the book out of my hands to get my attention.

Emily Rodd transports you far away and draws you into the story, it's easy to picture every detail in your mind. Britta continues to prove just how brave, strong willed and determined she is, there's nothing about her not to love. After reading two moons it was clear though that it is best to make sure you read book one first. Two moons picks up where book one left off and while book one built up the characters more Two moons focuses more on the story and is full of twists and turns.

The story is so well written that even though at times you can guess what is happening next you have to keep reading to see if you are right and where the story is going to go after that. Two moons will take you on an exciting, thrilling. emotional journey and will leave you wanting more.

It is 2036 and robotic technolgy has evolved into the realm of self aware sentient mechanical entities. Even as humanity contends with the consequences of its most brilliant creation, there are those who have their own plans for the robots: enslavement or annihilation.

Susan Calvin is about to enter her second year as a psych resident at the Manhatten Hasbro teaching hospital when she hears her father has been murdered. His death sets ... more...