ProdID: 6654 - How to Speak Dolphin
Written by: Ginny Rorby 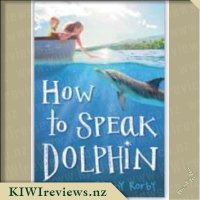 How to Speak Dolphin product reviews

Lily's half brother Adam is on the autism spectrum. Adam has always loved dolphins, so when her stepfather Don - an oncologist - hears about a young dolphin with cancer, he offers to help. He brings Lily and Adam along, and Adam and the dolphin Nori bond instantly.

Lily can see how much Adam needs Nori, but she knows that the dolphin should not spend the rest of her life in captivity. Can she help Nori regain her freedom without betraying her family.

Based on a true story.

Everything You Need to Know about the Human Body
Rating: 8.3

One of the items on my bucket list is to have breakfast with the Whales at the San Diego Sea World, after reading this book I feel sick about it and have changed my mind completely. I feel so conflicted now about Zoos and Aquariums. On one hand they give great medical care to the animal, they feed them and house them but then there are the ones who are taken from their families and live in terrible conditions and do tricks for us which is not only degrading for the animals it is rather sickening.

I had no idea that the animals are vertially starved so that when they do their tricks they are rewarded with some food. If they do it wrong they receive nothing so they thrive at being perfect for the share enjoyment of the ones that can afford to pay for it. The book describes it as feeding a Tadpole to an Alligator and does nothing to full them up.

Not only does this book take a fascinating look at animals in enclosures and how they are treated but it also looks at Autism and it is so insightful you just do not want to put the book down. You would be forgiven for thinking this is a true story as that it how it reads but instead it is purely fiction just with a lot of research put into it. The book is written in part by Lily, the sister to Adam who has severe autism and occasionally by Nori a bottle nose Dolphin who due to human error gets cancer. It is so depressing hearing how she feels locked up in a small swimming pool with her sonar all confused and with no escape - missing her mother and wanting freedom.

I learnt more from a girl who could not see, who lost her eyesight from the age of four, who in all honesty can see way more than most of us can. Her compassion has taught me so much. She showed me that against all odds doing the right thing can be accomplished and you should not take no for an answer. It was also heart wrenching to read it thru a fathers eyes and how heart breaking it must be for families dealing with a child who can not vocally express themselves.

This book really is a fantastic read. Although, the medical jargon could get a tad over whelming it is still a pretty straight forward story. The chapters where nice and fast and it is broken into four areas. I was shocked at how involved I became with the story and how it will effect me for sometime to come. As much as I loved it and would love to give it ten out of ten I don't think I could read it again, hense the lower than I should of scored it.

I picked this book up and read the blurb on the back. It gave a little information but no great detail on what the book was about, apart from a boy and a dolphin seemingly talking to each other. The cover art is beautiful. The blue of the ocean and the dolphin underneath, with the children in a boat in the sunshine looking down to her. It really drew me in so that, even after reading a bit more about what the book involved, I still wanted to read it.

A few things about the book's subject did worry me. I'm not very good with having characters go through too much difficulty in a book. I like coming of age tales, which is why I am often drawn to Young Adult fiction. But I try to steer clear of stories about illness because I don't like sad endings. However, I was intrigued about this story of an autistic boy, his family and the dolphin.

When I started to read I was surprised to be witnessing the birth of a dolphin. Having experienced labour myself (although not a water birth) I was fascinated by this chapter. The next chapter I'm in Lily's head and being introduced to her life. This drew me further in, as I instantly connected with her and her situation. It's not that I have lost a mum, or have a step-father. But I still found her incredibly relatable and easy to like. By the third chapter I was totally hooked and had to struggle to put the book down for any length of time.

In fact I took the book to work to read in my breaks and found I was so glued to it, that I was finished the book by 11pm that night, in-between work and motherly duties. This book opened my eyes in a lot of ways and personally spoke to me rather gently about differences, about conservation, about acceptance, and about what it is to be human. In every chapter the book opens further and further like a flower, revealing more and more the human qualities in each character.

At first I could not stand Don the step-father. I was exasperated by many of his decisions, and his failure to listen to reason. I felt for Lily, and saw the way she rebelled without her even realising that was what she was doing. I loved the character Suzanne, she was just so no-nonsense and practical. I did kind of hope for some kind of romance to reveal itself, but the story was just fine without it as well.

I loved that with Adam, you could feel the frustration and the love the family feel for him. You could see all the ways he tried to communicate and the frustration that he might have felt too. It really opened my eyes to how locked in he was, but also how locked out Lily and Don felt. All of the awkward social situations that must feel like climbing a mountain. The contrasts between the training of the dolphins and the training of Adam were really highlighted too and as a parent I put myself in Don's shoes and understood in part how much grief he was probably bottling down.

I loved the addition of Zoe as a new friend for Lily. Her being blind and getting some insight into what that might be like was really cool. She also offered a way to have things said where Suzanne wasn't around. The two characters really push the rest of the characters to see the truth even when it's painful. I did find Zoe very pushy and the pacing around her pushing Lily to get Nori back into the wild felt really abrupt in parts.

Overall, I found this a great book. The characters are all nicely rounded and have heaps to offer the reader. There were lots of "ah-ha" moments for me, and I really liked the challenge that it offered me around people who are differently-abled. It also spurred me to think about marine conservation and to look at ways to support good practices in New Zealand and also to help include my kids in that.

Score: 9.6
Product reviews for listing 6654: How to Speak Dolphin -  Written by: Ginny Rorby

Lily's half brother Adam is on the autism spectrum. Adam has always loved dolphins, so when her stepfather Don - an oncologist - hears about a young dolphin with cancer, he offers to help. He brings Lily and Adam along, and Adam and the dolphin Nori bond instantly.

Lily can see how much Adam needs Nori, but she knows that the dolphin should not spend the rest of her life in captivity. Can she help Nori regain her freedom without betraying her family.

Based on a true story.