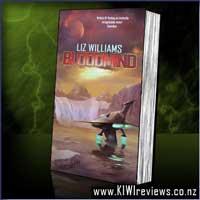 Vali Hallsdottir has returned to her homeworld of Muspell to discover that her nation is in chaos, preparing to face invasion from the neighbouring country of Darkland. When her friend and mentor, Idhunn, is brutally murdered and her spine removed and stolen, Vali falls under suspicion and is held by the army of the Morrighanu, but released by a mysterious force.

Having nowhere else to run, she travels across the northern ice field to the hostile glacier territory of Darkland, where she meets an old enemy, Thorn Eld, a member of the elite security force known as the vitki. Eld tells her that Darkland has spawned a rogue assassin, a female vitki killer known as Skinning Knife. Despite their differences Vali and Eld decide to join forces to track down the vitki's most lethal weapon.

Together they are facing some dangerous questions about the nature of Skinning Knife herself, and her impact on their world... and they are not the only ones who are desperate to discover the assassin's whereabouts...

After reading Darkland I was wondering what would come next... and I have to say I didn't expect this! With more twists and turns than a twisty-turny thing, this one started off a bit hard to follow, but as the story began to focus down on the 5 key players, it became quite enthralling.

Some SERIOUSLY strange technology, and all the 'usual' psionic evolutionary enhancements that were introduced in Darkland, get explained in greater detail in this book, which helped me out a lot as I was quite confused as to some of the 'abilities' referred to in Darkland, such as the "map implant" which seemed to be far more than a mere map, it seemed to be linked more as an instinct than an overlay.

Overall, still wouldn't class Liz Williams as one of my top authors, but she's getting there... rapidly...

The hee-haw hilarious Wonky Donkey family continues to grow, and in this adventure Wonky has a wonderful surprise for Dinky Donkey.

With laugh-out-loud, alliterative text, adorable illustrations and a song to stream or download, this fourth book in the bestselling series celebrates the strength of family and friendship with a wonderful, wrinkly, wiggly, witty, whiffy SURPRISE!