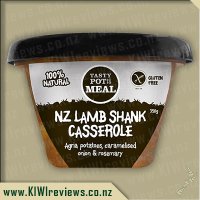 Disclosure StatementFULL DISCLOSURE: A number of units of this product have, at some time, been supplied to KIWIreviews by Tasty Pot or their agents for the purposes of unbiased, independent reviews. No fee was accepted by KIWIreviews or the reviewers themselves - these are genuine, unpaid consumer reviews.
Available:
at selected quality supermarkets

It took me a while to actually find this in the shops - seems it is a *very* popular flavour in this area for some reason. Whatever the cause, after trying it I can certainly see why. If you are anything like me, it's one of those flavours you'll try once, and want to go back and empty the shelf-full into your trolley. Weekly.

I admit though, I was expecting a little more in the way of 'chunks of meat' - while there were some, most of the meat appears to have been slow-cooked, because it's there but in very small chunks or has broken right down into strings. My teeth are very grateful for this, because chewing on big hunks of meat is no longer on the card for me.

The flavour was nice, not a tangy flavour at all, but nor was it the 'generic casserole' taste many such dishes end up being. There was a slight herbiness to it that was refreshingly different, but I could still detect the tomato undertones and the slight gaminess of the lamb. I was actually stunned by how well the flavours combined without blending together into one 'average' taste. Every bite had a cascade of tastes that rolled through as I ate.

Overall, despite my desire to fill my fridge with these, the price is a bit on the high side for that, even though the quality of the product fully justifies its price-point. This is, however, something I plan to keep in mind when the budget allows, as having a couple of these in the fridge would be great for those late-night snacks that sneak up when I am lost in the computer.

Winter to me means casseroles and soups nothing quite beats a hot meaty casserole on a cold day so I was quite excited to get and review this product. It was lunch time when me and my partner decided to share this between the two of us. We were both very hungry so sharing was hard but there is a decent amount in these pots so for a lunch a whole pot is quite a lot. My partner can handle a whole pot but for me I would not be able to finish the whole lot for lunch.

When this was heated the smell was divine I am usually not a fan on the smell of lamb but this smelt divine. It was mildly spiced so you could definitely pick up on the smell of the spices. And again the spices were evident when you ate it not really a heat kick but a nice balance of spices which makes for a nice warming casserole. There are plenty of vegetables in this and a nice amount of meat again like the chicken the lamb was kind of shredded rather than large chunks of lamb but was actually quite nice and definitely very tender so you didn't have any chewy or grizzly bits like you might with chunks of meat.

I liked the addition of potatoes to this casserole as it made it so filling and the potatoes were very tasty. If I was making a casserole at home I would normally serve it with mashed potatoes so having chunks of potatoes in the actual casserole itself was actually very nice and something I might try if I made one at home again.

My partner was a big fan of this one and has since bought it two more times to take as a lunch for work. At $6.49 it is actually quite a good price for a lunch and definitely more nutritious than stopping at a bakery to buy a pie or something so I am happy to buy these in my supermarket shop for him to take to work,

With the colder weather setting in I like to have filling lunches or I have hungry kids who want to snack all afternoon. I like that this is mild so I can't be told that it is too spicy but do feel it could have done with some salt, that thought didn't last long as this is really tasty.

I read the instructions and it was great to see that this can go into the microwave and the part about the hangi gave me a little giggle. I let mine stand for about 3 minutes so that it was not too hot as I tend to bite into food immediately and often have blisters on the roof of my mouth and it was still hot and tasty.

This would be a great way to get my youngest to eat vegetables as he often tries to pick them out and I would be happy with a bit more meat. It is great that the meat and vegetables were nice and tender and easy to eat.

Having a look and noticing that the best before date is a few months away I am going to buy a few to keep in the fridge for cold days or for when I don't feel like spending ages in the kitchen to get lunch done and being microwavable I can show my daughter how to heat them up so she can do it for herself. Now I am excited to try some of the other flavours.

I haven't had a heat and eat meal in quite a while as it would be an expensive way to feed five of us but I wouldn't mind finding a good meal again so I was very happy to get a voucher to give the Lamb Shank Casserole a try. As we don't have a microwave (though we could have borrowed one) I looked at the back and was happy to see it had instructions on heating on the oven, just throw it in a pot and heat until hot through. This took me about three minutes, so not bad time wise to get it nice and hot.

I'm always wary of lentils as I don't like the texture too much but because everything else inside the meal was so soft and tender I was able to handle and deal with the lentils. I didn't think that I was gong to like it at first, after all it doesn't 'look' pretty, but once I got into it I'd finished it off before I knew what had happened. My seven and four year olds both wanted to give it a try with my eldest deciding it wasn't nice and spat it out but my four year old thought it was realy good and wanted to eat more.

At $6.50 it is a bit expensive but I have seen it on special for $4 so on special I would buy this again, especially with winter hitting.

This has to be one of my top 3 favourite heat up meals now and I can see it being a staple item in my fridge over winter.

To start with I was thinking this will be another one of those flavorless meals that I will heat up and be really disappointed with. But I was pleasantly surprised. From the minute I took off the lid and tipped it into a bowl to heat I couldn't get over the amount of vegetables, the size of them and the meat to vegetable ratio. It was great to see for such a small heat up meal the amount of ingredients that were actually in the container.

I followed the instructions and heated it up in the microwave and loved the fact it heated up so fast. I took a mouthful and was blown away by the taste. If I closed my eyes it took me back to a lamb shank casserole that my grandma used to make when I was a lot younger. For me, this sealed the deal and I immediately added it to my grocery shopping list to purchase again.

The only thing that would put me off is the price. I have seen them range from anywhere between $6 down to $4 on special. I am unsure if I would pay the higher end price for it just because it is quite high for one meal. If it is on special I would definately be stocking up. Such a great filling and easy to heat meal perfect for lunch breaks or chucking in your bag when you are on the run.

I have often looked at the tasty pots but have been wanting to try them but I will be honest and say the price put me off slightly $6 seemed a lot and I wasn't sure I wanted to take the risk paying that much in case they tasted terrible. I was so excited to have the chance to review some of them and I am now kicking myself for not trying them a lot sooner!

I loved how quick and easy it was to heat, when you are on a half an hour lunch break the quicker the better. As soon as I got it out of the microwave the smell hit me and it was delicious, I couldn't wait to tuck in. The dish disappeared very quickly as the taste lived up to the delicious smell, their was a lovely mix of veges and big chunks of lamb shanks. The only way it could of been any better was with some nice fresh bread to soak up all the yummy juices.

I have already been out and brought another pot for my husband to try as I know he will enjoy it as much as I did. I really want to try thickening it little and trying it in homemade pies as I think it will be amazing. The tasty pot lamb shanks casserole is worth every penny and is going to be a regular on my shopping list, it's the perfect warm me up for a lunches on a cold day.

Your favourite Laffy Taffy in a new bite sized mini.