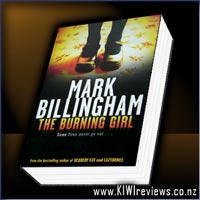 Disclosure StatementFULL DISCLOSURE: A number of units of this product have, at some time, been supplied to KIWIreviews by Penguin Random House or their agents for the purposes of unbiased, independent reviews. No fee was accepted by KIWIreviews or the reviewers themselves - these are genuine, unpaid consumer reviews.
Available:
yes

X marks the spot - and when that spot is a corpse's naked back and the X is carved in bloody, DI Tom Thorne is in no doubt that the dead man is the latest victim of a particularly vicious contract killer. It's morbid and messy - but it's a mystery with plenty of clues. This is turf warfare between North London Gangs. Organised crime boss Billy Ryan is moving into someone else's patch, and that someone is not best pleased.

Thorne's already got plenty on his plate when he agrees to help out ex-DCI Carol Chamberlain, frantically raking through the ashes of an old case that has come back to haunt her. When schoolgirl Jessica Clarke was turned into a human torch twenty years ago, it made horrific headlines. But now there's something worrying in the small print: Gordon Rooker, the man Carol put away for the crime, is up for possible release, and it seems there's a copycat at large. Or perhaps it's someone trying to 'right' a few wrongs. For Jessica Clarke was the victim of a mistaken identity. The intended target was the daughter of a gangland boss, a woman who would later grow up and marry a man named Billy Ryan-

For Thorne, what starts as a tenuous link becomes two pieces of the same puzzle. Past and present gradually fuse together and form a new, and very nasty, riddle. And when an X is carved on Thorne's front door, he knows that the smouldering embers of a long-dead case are about to erupt into flames-

The Underland Chronicles 4 - Gregor and the Marks of Secret
Rating: 8.6

I was given this book and told that the author was the new Lee Child - who I adore!
Unfortunately I wasn't as nearly as keen on Mr Billingham and Tom Thorne as I am on Mr Child and Jake Reacher.

Not to say that this is a bad book, because it isn't...
It's well written, has a good gritty feel to it and keeps you thinking right til the end with a good twist or two here and there.

However, I did feel that there were certain aspects of the main character and the storyline that could have been explained further - almost like there was a book that I was supposed to have read before this one...
Usually I don't mind waiting to find out bits of knowledge about characters, but the info I wanted on Thorne never appeared in this book... How did he get the scar on his face???

If you get get your head around reading about a half a dozen different characters from their own view point without full explanations then you will be fine with this one, however, if that is an issue for you, I'd think twice...

In saying that, it is one of a series of books and more information could be forthcoming :)
I look forward to seeing if this is the case

The DARE Award winners-Yasmin, Zander, Andy, Dylan, JJ, Isabel and Mila-have been caught in a deadly battle of wits with a mysterious enemy who isn't afraid to kill. Too late, they learned that the First Sign predicted catastrophic attacks which have lefy Egypt in chaos. yasmin is missing. Many more lives are at ... more...