« The Last of The Spirits review

I am a Big Sister review 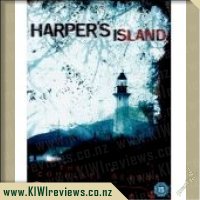 You are cordially invited to a wedding on Harper's Island. But what is supposed to be a lively week of celebration takes a deadly turn.

Beautiful heiress Trish Wellington (Katie Cassidy) and her betrothed Henry Dunn (Christopher Gorham) have invited their diverse group of friends and family to their nuptials on the secluded island. Although the locale is charming and romantic it has a sinister past. Seven years ago, six people were gruesomely murdered by the killer John Wakefield, including the mother of Henry's best friend Abby Mills (Elaine Cassidy).

As the "big day" approaches, secrets are revealed, relationships are tested and guests are being murdered, one by one. As victims start to outnumber suspects, who will be revealed as the killer?

I'm enjoying a sci-fi themed TV show on Sky at the moment, and each weekend it does a Box Set weekend, so a marathon of whatever show they have picked that time. Harper's Island got a turn and having a quick read up of it I figured why not, we've finally finished watching it.

Seven years ago there were some horrific murders on the island but now Abby (who lost her mother to the events) is returning to the island for her best friends, Henry, wedding. Henry and Trish are your typical 'princess marries pauper' relationship and all the characters are pretty typical for a horror scene, the nerd, the jock, the cheater and adulterer, innocent, 'beauty and the geek', dissaproving father etc. etc. Within the first few minutes though, we have our first death (which might raise a 'huh' moment, is answered by the end of the show).

None of the characters are anything amazing, only a couple of them do I still recall their names by the next day, but that may be due more to the length of time in the show than being memorable. Only two of the cast knew when they were going to be killed off with everyone else finding out when they got the next script and boy do they like dying in this show with a minimum of one dying per show up to five in another and all in various manners. There were a good couple of twists right at the end that I didn't see coming right away but once you thought about it afterwards it makes perfect sense.

Basically a stretched out horror movie, though it was fun and I will confess made me jump twice. I wouldn't own this, and possibly never watch it again but should they decide upon a second season then I might just watch it.

The TARDIS materialises not far from Paris in 1794 - one of the bloodiest years following the French Revolution of 1789. The travellers become involved with an escape chain rescuing prisoners from the guillotine and get caught up in the machinations of an English undercover spy, James Stirling - alias Lemaitre, governor of the Conciergerie Prison.

With many of the episodes missing footage but having found the audio, The Reign of Terror has been lovingly restored using striking animation.