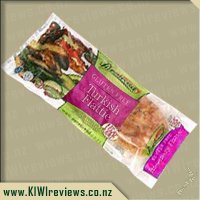 Disclosure StatementFULL DISCLOSURE: A number of units of this product have, at some time, been supplied to KIWIreviews by Purebread or their agents for the purposes of unbiased, independent reviews. No fee was accepted by KIWIreviews or the reviewers themselves - these are genuine, unpaid consumer reviews.
Available:
via Online Store and selected quality stores nationwide

NZ's first and only certified organic flatbreads. Purebread are very excited about this new and unique product where feedback says that you would not know they are gluten free.

Proud to be packed in fully compostable film.

CERTIFIED ORGANIC:
You are making a healthy food choice for your family (pesticide free) and with that you are supporting a sustainable future throughout the creation of this product.

STORAGE:
Great from the chiller or freezer.
Note: Even though they may feel hard after chilling they will revitalise to their soft, fresh-baked texture like magic.

This was my very first time to eat a Gluten-Free Turkish Flattie Heat'n'Eat from Purebread so I wasn't quite sure what to expect.I do not have a gluten intolerance or Coeliac disease but I do try to stay away from gluten in general for the sake of my overall health.

I really liked the packaging for this item as you could read the labels clearly and also see the actual product well which meant that you knew exactly what you were getting. This product also looked like it would work well to be popped into the freezer and then pulled out at a later date when you needed a little something to add to a meal. Unfortunately I didn't get to test this theory out as it was eaten too quickly!

This Gluten-Free Turkish Flattie Heat'n'Eat really lived up to it's name as all you had to do was heat it up and eat it and the heating part was really easy as there were quite a few different ways that you could do it. I heated my Turkish Flattie in a sandwich press and the Flattie was the perfect size to fit in the press and it heated and toasted it up nice and quick. This Turkish Flattie was the perfect accompaniment to any meal that just needs a little bit of something extra and it would also work well to be cut in half and have a filling put in it before toasted it off.

Overall my family and I really enjoyed this product and I will be recommending it to anyone that is looking for some great gluten free products!

These are not really my kind of thing at best of times but I was told by a mate that when he dropped the gluten and regular bread from his meals he felt heaps better and a lot of his sore guts problems went away. He was tested and told he didn't have any gluten issue but he swears his health is like twenty times better than it ever was. I figured it couldn't hurt to give it a go eh.

When I got it I thought it must have been a joke. It didn't look appealing to me. More like a lump of undercooked bread dough in a bag. It felt a bit squishy and I was thinking I must have been sent a dud. Still, I said I would do it. Glad I did now because it was pretty good. I cut the loaf in half, then sliced it end to end so I could fit it into my toaster. After a full cycle in there it was still really pale and soft so I pushed it back down for another run. By then it was turning crispy and a bit brown so I smeared one bit with honey and the other one with some butter and cream cheese with chives. They were both really really tasty. Not just the fillings eh, I could taste the bread and it was good.

The other half of the loaf got a different treatment. I cut it into slices again, about the same size as a regular slice of toast bread, and built a ham and cheese sandwich on the crust side of one slice, them slapped the other bit down crust-side in too. Buttering the cut sides, I tossed it into the fry pan to get all nicely cooked. I make all my toasted sanmdwiches in the fry pan eh. Heaps better flavour and easier to clean than those fancy sandwich presses. The taste was amazing. I could get the herbs, but the more important bit was I couldn't tell it was a fancy GF bread either.

If it wasn't for the price, I would switch off bread and eat these instead, but they just cost too much for me to afford regularly eh. Real shame, they're pretty amazing.

My previous experience of "gluten free" has been that it is expensive and why would anyone want to eat it? I had heard that Purebread products were nice and I think I have even tried some at an expo previously without hearing the "gluten free" part. I thought that the Purebread products seemed like they were worth a try. It is always nice to know about good options to have available for friends who visit with a gluten intolerance.

After receiving the flattie, my first port of call was to have a look at the ingredients to see what they would put into such a bread. The fact that the product needs to be refrigerated and that there is a short period in which the bread needed to be eaten gave me a clue that I would be eating 'real' food rather than "food" which was pumped with rubbish in order to make it last. The ingredients that I was greeted with were all foods that I could potentially find in a pantry (except they are organic and I don't tend to have them...but I am sure you get the picture). The only item I didn't recognise was Guar Gum. I popped online and found that it is taken from guar seeds and can be used as a thickener. Being a natural product I assume that it is a good option.

When I took the flattie out of the plastic packet, it felt a lot denser than normal bread and it was also a bit crumbly. The initial taste (straight from the pack) surprised me. It wasn't the dry, strange tasting experience that I had previously associated with gluten free bread. It was quite moist and rather tasty. I was looking forward to testing the product out properly.

Seeing as I hadn't used this product before, or anything like it, I started with the serving suggestion on the back of the pack. I had tomato, basil and garlic from out garden and prepared some yummy bruschetta with grilled flattie. My husband and I really enjoyed the point of difference the taste and texture offered in comparison to standard bread.

The next day, I tried it in the toasted sandwich press with a little olive oil. We served it with cheeses, sundries tomatoes, humus etc. Again, it was a nice addition to this platter.

The price of the flattie makes it a rather expensive option for an everyday lunch, considering I don't have a health reason to require gluten free. I would, however consider it for a special treat as we did enjoy it.

So - this is a product which has pleasantly surprised me. To think that people who have to be gluten free can have food which is really good to eat is just great!

While spending nearly ten dollars on a snack-sized hunk of bread may seem a bit OTT, you have to take into account that this is Gluten Free, and as such doesn't use wheat flour - a commodity that is still relatively inexpensive. Instead, it requires careful a mix of other suitable carbohydrate replacements, gums and other 'secret ingredients' to replicate the effect of gluten - building a chemical scaffold that allows the bread to aerate and rise due to the effects of yeast. Add to that the 'hand made' aspect of it, and the price is not as exorbitant as it may have first seemed.

Having tried a sample of this at a recent expo, I was sold on it, and I have no gluten-related issues I am aware of. Reminding me of a less-chewy Ciabatta, this was amazing when cut into two large flat slices, spread with butter, a few sliced cherry tomatoes, a small cluster of freshly-picked Basil leaves and topped with some grated cheddar cheese, then popped under the grill. I did up one "slice" like this, and the other was just spread with a little butter, grilled to golden, and then topped with a bit more butter. Both ways were perfection!

Because I don't have the health issues that would require a gluten-free diet, I don't think this is one I will buy. However, I highly recommend these as an option to anyone who does have, or chooses to lead, a gluten-free diet. From all the breads and bread-replacements I tried at the expo, these are pretty much the closest thing I could find to "real bread" that didn't have a grainy, sandy texture as I chewed. It's a very versatile format, so should be able to sub in for bread in any number of dishes, such as French Toast, Paninis, subs, etc.

Overall, quite the eye-opener, and certainly a winner in my book. I will be, and already have, recommended these to anyone I meet who is looking for such things, and also a couple of my favourite restaurants who are looking to expand their GF offerings.

A mix of fresh herbs and aromatic spices which, when combined with yogurt and lemon juice, creates an authentic Indian dip. It can be used with any snacks or main meal such as Tandoori chicken, chips, wedges, or veggies.

No preservatives or additives, no colouring, gluten free, nut free and fat free. It is also salt free although salt can be added to taste if required.