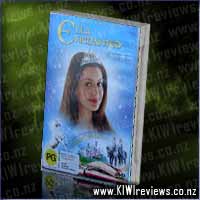 When her mother passes away, Ella is cared for by a somewhat absentminded father who remarries a loathsome woman with two treacherous daughters. This modern-day, fantasy Cinderella features fairies, ogres and elves...as well as a hero in the guise of Prince Charmont, whom Ella falls in love with. Unlike Cinderella though, Ella must depend on herself and her intelligence to get her through her troubles and find Lucinda in order for her "curse" to be broken!

I really, really enjoyed this movie. I watched it when it first came out at the movies. My mum and I had seen the trailers and decided that it looked like a fun movie, and so off we went.

There is so much good about this movie. It was really moving at parts (I was in tears when Ella was forced to tell her friend that she hated her and again when she was breaking her spell so as not to kill her beloved). And I am a total sucker for dance numbers, in fact, this is one of the very very few soundtracks that I actually own.

The special features on the DVD were nicely done, I don't usually watch any of the segments on the making of the movie etc. but I really enjoyed this one as it was done as almost a short film, and had the actors still in character.

A twist on a fairy tale is always going to be careful treading, as you want to stay true enough to the original that you keep a hold of old fans, but also 'new' enough that you create new fans. This is a fun movie, and great for all ages.

I went to see this movie when it was first released. I've always enjoyed fantasy and fairy tales and anything with a twist on the traditional. My favourite miniseries so far has been the 10th Kingdom and my favourite books have been Piers Anthony's Xanth series.

Ella Enchanted follows a similar twist on the traditional fairytale genre. She's a not so modern-day Cinderella who lives in a quirky world of magic and monsters. The storyline kept me interested the whole way through. Anne Hathaway carries the film with her normal ease. Still "Ella" isn't a stretch for her, after the Princess Diaries.

Overall, I loved the movie, the effects and the empowering heroine at the centre of it all. I would happily watch this again and again.

This is one of those cases where you really shouldn't judge a DVD by it's cover. I was forced into watching this movie (babysitting *groans*) and by the end I was trying to decide whether to laugh or cry. Despite all expected cheesy-ness, Ella Enchanted was actually brilliant.

Anne Hathaway brings a warmth and determined believability to a character stuck in enternal obediance. I really enjoyed her journey and was pleasantly surprised by the way this film could laugh at itself while still maintaining a serious and quite moving core. I especially loved that the answer had been there all along. I got to the end thinking 'why didn't I think of that' - as I expect Ella herself was thinking when it turned out to be so beautifully simple.

Ella Enchanted was, quite simply, a fun, clean children's movie with enough intelligence to keep a baby-sitter amused over its full 96 minute running time.

Raymond is autistic, but is able to calculate complicated mathematical problems in his head with great speed and accuracy. Their father has left his ... more...