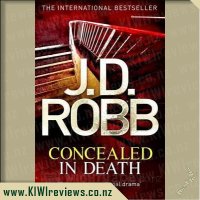 There is nothing unusual about billionaire Roarke supervising work on his new property â" but when he takes a ceremonial swing at the first wall to be knocked down, he uncovers the body of a girl. And then another â" in fact, twelve dead girls concealed behind a false wall. Luckily for Roarke, he is married to the best police lieutenant in town. Eve Dallas is determined to find the killer â" especially when she discovers that the building used to be a sanctuary for delinquent teenagers and the parallel with her past as a young runaway hits hard. As the girls' identities are slowly unraveled by the department's crack forensic team, Eve and her staunch sidekick Peabody get closer to the shocking truthâ¦

This is one of the books in the series that was not as enjoyable as most of them are and I wasn't feeling inspired to finish it, but given that a good portion of the "In Death" books contain character development, insight into the characters and watching the relationships between the characters, especially Eve and Roarke it was still easy enough to read, just not a huge amount of fun. There are benefits for a slower paced book and it does mean a bit more patience but it pays off with a nice ending and some more lessons learnt about our characters.

The plot is simple enough, Roarke has bought yet another building, but as he wants to make this something a bit more special he is taking part in the demolition of the building, but what he discovers is two dead bodies hidden within. Naturally he calls Eve, who discovers more bodies and the hunt begins to find the person who killed them. It wasn't too hard to work out who was the killer and what was going on, but as I said earlier, the character development was worth it and we learn more about our vibrant, out of the world, Mavis.

When Tim Ellison finds a cheap room to rent in the perfect location in Sydney it looks like a huge stroke of luck. In fact the room comes with a condition, and the owner of the house, the mysterious Anna London, is unfriendly and withdrawn.

When strange and terrifying things start happening in the house at night, Tim wonders if taking the room is a mistake. But then his feelings for Anna start to change, and when her past comes back ... more...