Hope in a Ballet Shoe review 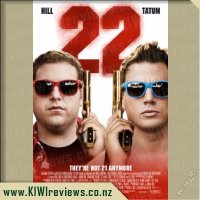 After making their way through high school (twice), big changes are in store for officers Schmidt and Jenko when they go deep undercover at a local college.

But when Jenko meets a kindred spirit on the football team, and Schmidt infiltrates the bohemian art major scene, they begin to question their partnership.

Now they don't have to just crack the case - they have to figure out if they can have a mature relationship. If these two overgrown adolescents can grow from freshmen into real men, college might be the best thing that ever happened to them. I enjoyed the first film more than I was expecting. When I watched the sequel, I noticed all of the not-so-subtle hints at how this film was just going to be much of the same, effectively spelling out exactly what you would expect to have to go through while watching the film. Despite this clear acceptance of the fact that it would be much the same, it did little to help me enjoy the film more. I did have a small laugh at that part, but it soon passed, and I became bored.

The first half of the film did pretty much go as would be expected. It went down the usual paths, with it's usual over-the-top "action" scenes, and "comedy". This film seemed to steal the first half of the film from every 'American Pie' movie ever made. It really seemed more slap-stick that thought-provoking humour. Something a teenager would enjoy. Heck half of the stuff even a primary school child would laugh at.

The second half however, I did enjoy. Once it passed its obligatory "we are doing the same thing" buzz, the plot started to get interesting. The relationships in the film started to have an effect, and the true villains became apparent. While still full of the stereotypical 'Spring Break' and 'University' references and jokes, the humour felt fresh, and I had several laugh-out-loud moments.

I even sat through the ending credits as it outlined the "upcoming sequels" and"merchandise" which was a nice touch. It came through in the end. I went from regretting the film, to recommending the film, and overall I have positive memories of the film. So yeah, give it a watch. Don't expect great things, but you should definitely notice an increase in quality as the film progresses.

I like most people had the hugest crush on Johnny Depp and the 21 Jump Street Crew and when I heard it was being made into a movie could not wait. The first one I found was rather disappointing so was not sure how the second one would fair.

The explanation about no longer residing at 21 Jump Street had me in stitches so did the gag that next time they beleive they will be across the road and had a banner '23 Jump Street Coming Soon'. Then when they walk inside they comment that the office is like a 'cube of ice' yes I again was laughing. The silly gags kept popping up all the way through and it was brilliant.

It got a little boring half way through, but the best car chase I have ever seen pulled it back and I was captivated once again. Seriously the car chase is hilarious especially when they just got the warning about costing the department no more money. Channing is pure gold. It really is well written. definitely a comedy and you will be laughing at the silliest things. The movie does not take itself seriously and pokes fun at itself the whole way through.

One of the best things is when the credits roll and show you clips for the next lot of 'Jump Street movies' coming out. I am still shocked at Bookers appearance. But I loved the cameos and the idea behind it. If you want a light hearted, non brainer, extremely funny and predictable movie this is it. The fight scene with the room mate and Jonah is so awkward but yet classic. I am so impressed with it have not deleted off hard drive as would like to watch again.

Love is here to stay... so is her family.

For the few who haven't seen it, Toula Portokalos is 30, Greek, and works in her family's restaurant, Dancing Zorba's, in Chicago. All her father Gus wants is for her to get married to a nice Greek boy. But Toula is looking for more in life. She meets Ian Miller, a high school English teacher and dreamboat. They date secretly for a while before her family finds out. Her father ... more...