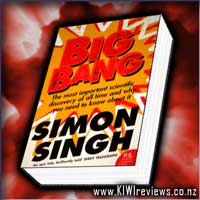 Disclosure StatementFULL DISCLOSURE: A number of units of this product have, at some time, been supplied to KIWIreviews by HarperCollins or their agents for the purposes of unbiased, independent reviews. No fee was accepted by KIWIreviews or the reviewers themselves - these are genuine, unpaid consumer reviews.
Available:
9th May 2005

The most important scientific discovery of all time, and why you need to know about it.

Everybody has heard of the Big Bang theory, but how many of us can actually claim to understand it? Why do cosmologists believe the Big Bang to be an accurate description of the origin of the universe? Who were the scientists who fought to bring acceptance to this unorthodox theory? And what, exactly, does the Big Bang really mean?

In this unprecedented book, Simon Singh, bestselling author of Fermat's Last Theorem and The Code Book, explains the most famous and arguably the most significant idea in the history of science.

With characteristic clarity and a narrative peppered with anecdotes, Simon Singh has written the astonishing story of the beginnings of the cosmos. It is a thrilling ride through the history of the universe itself.

STUNNING! This book has the power to redefine how we look at the universe, and our place in it. It's biggest strength is it's easy language, making serious high-brow science accessible to anyone with enough brainpower to walk and chew gum at the same time.

When I first picked this book up, I admit I was a little worried. It's a thick book, and the quick flick through the pages revealed a disturbing lack of highly detailed pictures, a staple in any high-sci book I end up really getting into... the side effect of being a visually-cued thinker. However, after about 10 minutes reading, I looked over at the clock and realised I had in fact been so totally absorbed in reading that nearly 2 hours had passed. I blame it on Einstein's General Relativity myself, I mean there is NO WAY I could lose that much time, surely!

From the very beginnings of recorded history, mankind has stared up at the pinpoints of light in the night sky and dreamed of what they might be. We have come a long way, and this publication covers it in amazing detail, without getting lost in reams of arcane mathematics. I was always good at maths, but not good enough to be able to handle some of the transforms and physical maths required for this topic... so Simon's ability to summarise it in Joe Public-level terms was astounding and much appreciated.

My only point of curiosity was a slight discrepancy between this book and some elements from the movie Hawking... which both cover the topic of the Big Bang vs Steady State theories... Steven Hawking just missed out on being taught by Professor Hoyle, a key character in cosmology and co-founder of the Steady State theory. It was a preview of one of Hoyle's papers that sparked off Hawking's interest in cosmological physics and resulted in his ground-breaking book "A Brief History of Time"... yet Hawking rates only a single one-line mention in the entirety of Singh's book. This strange omission, and a few minor misalignments, stopped this book getting a Perfect 10. Shame really, it does deserve it. Though, all things being equal, I would trust Simon's interpretations over and an admittedly dramatised doco movie... it just rubbed a little.

Overall, if you enjoyed the 'Hawking' movie, you should get this book as well (if you haven't already) as it sheds further light on the lead-up and follow-on from the movie. And vice verse of course, if you read this book and like it, you should go and get the movie, since it gives you further insight. Combined, they give an eye-opening view into how our universe was really discovered and diagnosed. From start to finish, this is a gripping read, a valuable asset to the bookshelves of any high-sci reader, and a good way to get a better idea of the universe around you for anyone at all interested in "what is reality, really...".

In the epic conclusion to the series that began with the award-winning A CRUCIBLE OF SOULS, Mitchell Hogan combines the wonder of classic sword-and-sorcery fantasy with the grit of the modern masters to create something at once familiar and unique for readers of all ages.

In a battle of armies and sorcerers, empires will fall. After young Caldan's parents were slain, a ... more...