Guess How Much I Love You. The Adventures of Little Nutbrown Hare: Father and Son review 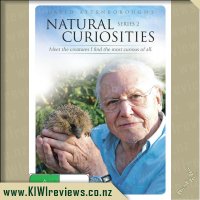 Disclosure StatementFULL DISCLOSURE: A number of units of this product have, at some time, been supplied to KIWIreviews by Roadshow (NZ) Ltd for the purposes of unbiased, independent reviews. No fee was accepted by KIWIreviews or the reviewers themselves - these are genuine, unpaid consumer reviews.
Available:
August 2014

Now, in this second and longer run of his popular Natural Curiosities series, he reveals another group of bewildering animals that intrigue him. We discover the amazing frog that freezes solid to survive winter, and the female Komodo dragon's ability to reproduce without ever meeting a male.

Other curiosities include some of nature's great tricksters and two creatures that have attracted an undeserved bad reputation. David takes viewers on a special journey through the weird and wonderful natural world to find out more.

Our family loves to watch nature documentaries together. The Natural Curiosities Series 2 DVD set definitely caught the attention of all of us - from Miss Two and Mr Four to my husband and me. Natural Curiosities Series 2 has an impressive balance of nature shots, drawings, animations, narration, visuals of David Attenborough in the wild and in museums/laboratories and artefacts etc. This combination kept all of us engaged and focused on the documentary for extended periods of time. We found that we would watch one to two episodes from the DVDs at a time. It was a great pacifier before dinner each night (when the kids tend to be a little on the over energetic side!).

David Attenborough has a voice that I have grown up with and one that I would recognise even more so than his face. He has a voice which will be familiar to many people who have had an interest in nature programmes over a number of decades. His voice is confident and commanding and easy to listen to. He uses variation in the tone, speed and style of his voice. When we see David on the screen, he has a very animated face and we also see that he uses a lot of body and hand movement as he speaks. This all contributes to the engagement of the viewer of the episodes.

It was intriguing to learn about some of the curiosities in the animal world and this series focuses on a quite number of them. These are from different locations and species. It is wonderful how the historic information is fed in to the story too. The documentaries are slow and steady and give in-depth information about the topic at hand.

Through every part of each episode, my four year old was glued to the screen. Interestingly enough, my two year old daughter enjoyed sitting still for a prolonged period as well. Many people assume that children are just interested in mindless TV programmes and cartoons. From my experience, children are generally extremely interested in the world around them and the living creatures who live with us. Watching this series of documentaries has given my children something to entertain them as well as gain new knowledge from.

Great closeups of the hedgehogs and their babies. These are the the views of life that we don't usually get to see. The meeting of the lions with the porcupines was a great sight too. The music enhanced the viewing of this event. I could see my four year old's head getting closer and closer to the screen as he watched.

Watching the owl fly was just beautiful and peaceful. It is such an interesting looking bird. The opportunity to look at the skeletons of some of the animals and birds helped us to gain more knowledge about the creatures Attenborough was telling us about. We were amazed that owls can rotate their head 270 degrees. My four year old had to stand up and try to see if he could rotate his head in the same way. The funny thing is that he believes that he was able to. It is great that the footage encouraged my son to think and make sense of his own world while watching the programme. This is so much better than him being a passive viewer of the TV.

We were all amused by the cuckoo and the deception it creates in order to get another bird to raise its eggs. The egg has to be a perfect match for the grey warbler so it doesn't get rejected. The baby chick then tricks the grey warbler in order to keep feeding it by making the sound of an entire nest of grey warbler chicks. Totally incredible information to take in.

Mr Four has referred back to a number of the creatures during the week after watching the relevant episodes. We have had many lengthy discussions with him about the various animals, birds etc that he has seen on the screen. Even though the documentaries are perfect for adults, they have also proven to be of great interest to my young children. I have never seen Miss Two sit so still for anything. These episodes obviously caught her attention.

There was a good range of curiosities presented by Attenborough. Most of them we didn't already know about and therefore the entire family gained a boost in knowledge. A fantastic viewing for our entire family.