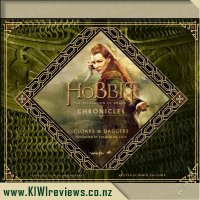 Disclosure StatementFULL DISCLOSURE: A number of units of this product have, at some time, been supplied to KIWIreviews by HarperCollins or their agents for the purposes of unbiased, independent reviews. No fee was accepted by KIWIreviews or the reviewers themselves - these are genuine, unpaid consumer reviews.
Available:
June 2014

The Hobbit: The Desolution of Smaug - Cloaks & Daggers product reviews

The Hobbit: The Desolation of Smaug - Cloaks & Daggers explores in amazing detail the costumes and props that populate Middle-earth in the first two chapters of Peter Jackson's film adaptations of J.R.R. Tolkien's The Hobbit.

This is a photo gallery of the costumes, props and set dressing, including armour, weapons and jewellery, made for the first two films. It is composed of photography and screen captures, telling the story of how they were created. Where the concept art books focus on ideas, this focuses on what was actually made.

Pages are themed according to specific characters, locations, races etc. and lean heavily on beautiful studio and on-set photography of the finished pieces as well as film stills. Concept art, detail shots and imagery of materials samples and mock-ups is also used to weave stories around the finished items. Behind the scenes processes are showcased with supporting photographs of elements actually being created.

As a bonus feature, unique to this book, there is a special fold-out gallery of unique and beautiful costumes shown in sumptuous detail. Compiled by Weta Workshop designer Daniel Falconer, and featuring a wealth of stunning imagery, this book puts the reader face to face with the Dwarf heroes of The Hobbit: An Unexpected Journey, the dark denizens of Middle-earth, such as Orcs, Goblins, Trolls and Wargs, and of course, the hobbit himself, Bilbo Baggins.

Skandar and the Unicorn Thief
Rating: 8.5

I was very lucky to receive this truly stunning book to review recently As a former film student, with a sibling who has previously worked for Weta and a general high regard for our local film industry, I was very eager to read this. The front cover this is large hardcover book is beautifully presented. It has a chain-mail look to it, and you can feel the bumps of the rings as they weave. The cover is also printed with gold font and detailing, and additional glossy details which adds to that luxurious feeling.

Inside is a journey through the behind-the-scenes design and craft that went into the Hobbit films, and in particular the Desolation of Smaug. There is an introduction written by Evangeline Lilly and a foreword by Ann Maskrey, the costume designer, and then for the most part the book is filled with little paragraphs from various people involved in each piece of the puzzle.

I really liked that the different voices weave together. It made the book a good read, because you got so many different perspectives. Each person being passionate about their craft, helped you get inside the process more. And there is so much humour, and back-story too. The things that happen behind the scenes that you can imagine, bit reading it is different. I could really picture the difficulties they faced.

When you think about it, so much work goes into any film, and often for things to be seen for mere seconds or not at all. That's the beauty of a book like this, because all the hours of work aren't lost. They are right here, in a big coffee-table style book. I really loved looking at all the different pottery styles, the weaponry created and how they designed things for each race too. The sheer number of copies of things they would have had to make, was amazing.

So many beautiful costume pieces, and jewelery pieces too, to drool over. My daughter really enjoyed looking at all the beautiful photos, just as I did. It was neat having picture plate details as well, so you could read a few more details on the item. This is the sort of book, you don't read cover to cover. It's one you re-visit over and over again. A must for film fans and Hobbit fans.

Score: 8.5
Product reviews for listing 3630: Wolves of the Beyond - Spirit Wolf -  Written by Kathryn Lasky

Now, with a dangerous threat on the horizon, the pack must make a choice. Will ... more...