Sheep on a Beach review 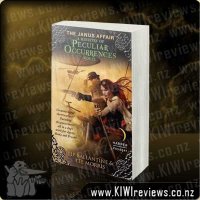 Disclosure StatementFULL DISCLOSURE: A number of units of this product have, at some time, been supplied to KIWIreviews by HarperCollins or their agents for the purposes of unbiased, independent reviews. No fee was accepted by KIWIreviews or the reviewers themselves - these are genuine, unpaid consumer reviews.
Available:
June 2012

There's something rotten in the city of London. Women are disappearing - young and old, rich and poor, from all walks of society. The only thing they have in common is their belief that women also deserve the vote. It's up to the Ministry of Peculiar Occurrences to find out why these women are vanishing, but agents Books and Braun have their own challenges.

There's a turncoat with nefarious plans within the Ministry itself, and the reappearance of an old flame means their growing friendship is threatened. To say nothing of the queen of the underworld, assassins-attacking-on-ornithopters, and a conspiracy that reaches to the heights of London Society.

I admit to not having read much in the way of steampunk stories. The odd short story as part on an anthology, but never really a full novel. It just never really struck me as a technological branch that could have really taken a hold - the last time I checked, steam was not compatible with neurological signals, so I failed to make that leap of faith that allowed me to suspend my disbelief enough and accept the technology for the sake of the story. However, this one was worth giving the benefit of the doubt for two main reasons.

Firstly, despite being written by an American couple, the main characters have strong cultural links to Kiwis: The male protagonist is British, and named Wellington Books, while the female protagonist - Eliza Braun - is apparently a redheaded Kiwi. If nothing else, I had to laugh at the British/Kiwi cultural crossovers. (Oh, and the cherry on top, the traitor in their midst... an Aussy!)

Secondly, the story, I was assured, was more about the plot and the people, and less about the actual steampunk technology. This made it a lot more appealing for me, as it meant the bits I couldn't just let go an accept would be discrete and easier to overlook. They were right, except for a cyborg version of famous Kiwi Suffragist Kate Sheppard, there really was very little in the way of Steampunk intrusion into the story.

Now, before you throw your hands up and cry "But I LOVE Steampunk! That's it, I am not going to buy this..." I need to say that it is far from being invisible. It does pop up... all over the place... and some of it is really quite nifty, especially if you can accept the Victorian-era version of modern machines - computers, motorbikes, cybernetic limbs, strength-enhancing exoskeletons, and the likes. It's just that the technology is mentioned and not promoted, if you will accept my distinction.

Overall, did I enjoy this book? Most definitely! I regret not getting the first book when I had the chance, I think it might have been a great way to slowly start accepting more of the Steampunk mythos into my preferences. I've seen it in movies and enjoyed it, but as a literary device I used to find it quite difficult to tolerate - this book has softened that stance a little. Perhaps another few stories like it would open me up to the possibility of enjoying it more in future.

Packed with incredible facts and stunning images, "Dinosaurs Life Size" brings to life the most terrifying, infamous and fascinating dinosaurs from land, sea and air.

This lavishly illustrated book takes an in-depth look at their true size, combining life-size images of their bones, claws, horns and teeth with amazing statistics on height, weight, speed, lifespan and habitat.