The Twelves Dogs of Christmas review 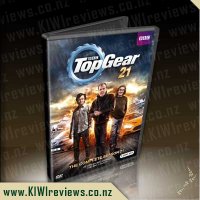 Disclosure StatementFULL DISCLOSURE: A number of units of this product have, at some time, been supplied to KIWIreviews by Roadshow (NZ) Ltd or their agents for the purposes of unbiased, independent reviews. No fee was accepted by KIWIreviews or the reviewers themselves - these are genuine, unpaid consumer reviews.
Available:
May 2014

In the all-new 21st series of the world's favourite car show, Jeremy Clarkson, Richard Hammond and James May embark on a huge road trip across Ukraine in three small cars with even smaller engines, re-live the glory days of the 1980s in three 'classic' hot hatchbacks, and have a ham-fisted crack at making a public safety film for the government.

There's also the new Alfa 4C sports car racing a very unusual quad bike, the sensational McLaren P1 tearing a strip off Belgium, an insane six-wheeled Mercedes in the desert, and the unusual sight of James May in a Caterham. And as if that wasn't enough, the series includes an epic two part adventure across the wilds of Burma as the presenters take three lorries on what could be Top Gear's toughest challenge to date.

My husband is an avid Top Gear watcher and because of this I've been forced to watch a few episodes and I've actually started to enjoy them. When I saw Top Gear The Complete Season 21 come up for review I was happy to raise my hand and request a copy. My husband was thrilled when it showed up and we even managed to get the kids in bed a bit early so we could start to watch.

To have lasted 21 years on TV is a huge achievement and understandably the show has changed over the years. This season is full of the usual funny banter you expect from the series as well as cars new and old. After being around for so many years I thought that this season might be a little dull and getting a bit boring but it definitely wasn't. If you love cars, explosions and witty banter then you must watch this season.

The first episode we watched was all about the guys (Jeremy Clarkson, Richard Hammond and James May) revisiting their youth and looking at old school hatchbacks and comparing them with todayŌ ™s versions, this of course ends in typical teenage type behaviour, a race and a huge explosionŌ” All in all, it is a perfect first episode to a great season.

Other episodes include an Alfa Romeo 4C race against a quad bike which turns into a jet ski, James playing with military vehicles, Stig driving a Porsche and McLaren P1 around the track and Jeremy promising to change his name to Jennifer?

The only big name star that I actually knew in this season was James Blunt but IŌ ™m pretty sure my husband knew a couple of the others. The interview with James Blunt was great and I thought that his lap around the track was something that everyone needs to see at least once, his facials are priceless!

It did seem like a bit of the humour was scripted and forced and I wonder if they had left it unscripted it would have been better. Either way, itŌ ™s definitely a season to watch to if you enjoy anything to do with cars or motor vehicles at all. Even if you donŌ ™t enjoy motor vehicles it is very entertaining to watch.