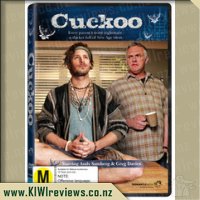 Ken and Lorna Thompson's daughter Rachel has returned from her gap year with a new husband, Cuckoo - self appointed spiritual ninja. He is every parent's worst nightmare - a slacker full of outlandish, New Age ideas. Ken and Lorna have no choice but to welcome him into their family home - and if every Englishman's home is his castle, then this hippie has stormed Ken's fortress and plundered everything including, most unforgivably, his princess.

I'd seen half of Cuckoo on TV when it first aired but fell asleep on it and then forgot to record the next episodes in the series.

This is a comedy drama TV series about a husband and wife and their teenage son-in-law who lives with them, they head to the airport to pick up their daughter who has been gone for a year (the couple of minutes lead up to this shows that she is obviously expected to go far and is daddy's little girl). She brings with them a husband who is very hippyish, new age and doesn't want a 'conventional' job. Of course the father sees him as a lazy freeloader who has ruined his daughters life and future prospects of a well paying job. So naturally one expects plenty of laughs...

My husband and I watched this together and both agreed that the first episode was far more cringe-worthy than actually funny, everything seemed a bit too rehearsed and while the actors were ok it just didn't feel like it was good, it felt more like everyone was a stranger, not a family and one stranger. As the season went on it slowly, very slowly improved, but as my husband said, the first few episodes were only watched to see what bizarre situation would happen next and he left after the 4th episode.

The acting was good but it wasn't until the final episode that everything really flowed well and whilst partly the most 'out there' episode, was in fact the best one. I would be totally honest in saying that had I watched the whole of the first episode on TV I would never have bothered watching it further on. I did end up enjoying the first season but for me this more of a, if-I'm-channel-surfing-and-nothing-else-is-on type of show and not one I will activity watch out for season two.

Fun, but nothing great.

Encouraged by his ailing friend (Chris Cooper), Jake journeys back to 1960s Texas to prevent the assassination of President John F. Kennedy. As Jake explores the mysteries surrounding alleged ... more...