And Now For Something Completely Different review 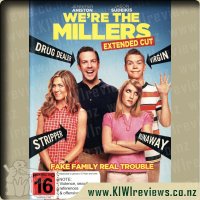 If anyone asks... we're the Millers.

David Burke (Jason Sudeikis) is a small-time pot dealer whose clientĆØle includes chefs and soccer mums, but no kids-after all, he has his scruples. So what could go wrong? Plenty. Preferring to keep a low profile for obvious reasons, he learns the hard way that no good deed goes unpunished when he tries to help out some local teens and winds up getting jumped by a trio of gutter punks. Stealing his stash and his cash, they leave him in major debt to his supplier, Brad (Ed Helms).

In order to wipe the slate clean-and maintain a clean bill of health-David must now become a big-time drug smuggler by bringing Brad's latest shipment in from Mexico. Twisting the arms of his neighbours, cynical stripper Rose (Jennifer Aniston) and wannabe customer Kenny (Will Poulter), and the tatted-and-pierced streetwise teen Casey (Emma Roberts), he devises a foolproof plan. One fake wife, two pretend kids and a huge, shiny RV later, the "Millers" are headed south of the border for a Fourth of July weekend that is sure to end with a bang.

I finally got to watch this movie on TV having missed it at the cinema. From some of the reviews I'd read elsewhere I was expecting to be laughing my head off and wishing I'd seen it earlier. Sadly this was not the case. In a nutshell, David sells weed but when his supplies and cash get stolen, he needs to repay his debts so he agrees to collect some drugs from Mexico for his boss. In order to get across the border he enlists the help of a stripper (Jennifer Anniston), who has just lost her job and apartment, a naive kid called Kenny and Casey a teenage girl with attitude. Together they pose as an all-American family called the" Millers" and travel in a huge R.V. They need to collect the drugs, get over the Mexican border, avoid the bad-guys and deliver the drugs successfully.

There were some funny moments in the film but they were mostly in 2 main scenes. A painful one involving Kenny a spider and a bite. The second, with another couple who need to spice up their love-life and think the Millers are swingers.

I admire Jennifer Anniston for breaking out into a different sort of role but she is just too "nice" to portray a foul-mouthed stripper who likes to flip the finger frequently. Naturally she has a scene which requires her to demonstrate her stripping skills to get the Millers out of a difficult situation but I don't know if it was me uncomfortable watching her, or her uncomfortable with the scene but it was almost as painful as watching Jamie Lee Curtis trying to be a femme fatale and strip in "True Lies". Anniston also has a rather odd scene where she and her "daughter" Casey both teach Kenny how to kiss which then leads to more misunderstandings with the other rather clichĆ ©d R.V. family. For me it was Kenny (Will Poulter) who saved this film and got most of the laughs one way or another.

I wouldn't rent it or buy it but you might want to watch it if it's on TV.

We hired this because going by the trailers it looked like a funny movie, and we were a little stumped for one more movie for our voucher deal.

David is a small time drug dealer, has been since college and still working for the same guy, who is now fabulously rich. When David gets robbed, to clear his debt he has to go to Mexico and pick up some drugs, and so to look legit and not raise any red flags he gets a stripper who lives in his apartment building to pose as his wife, a local runaway as his daughter, and a boy that lives in the same building as his son. Things of course do not go to plan resulting in some laughs.

I didn't find this as fun as I thought that I would, I actually ended up switching off at times and missing a few small parts of the movie, which didn't effect the overall viewing of it at all aka. I missed out on nothing. There were a couple of funny parts but nothing of any greatness, in fact the best part of it for me was in the outtakes in the end credits where they turn on the radio and it blares out the tune songs for F.R.I.E.N.D.S.

This was ok, but not what I expected so I don't think I will watch again.

Score: 9.2
Product reviews for listing 667: What the bleep do we know?! -  Directed by William Arntz, Betsy Chasse, Mark Vicente

WHAT THE BLEEP DO WE KNOW?! is a new type of film. It is part documentary, part story, and part elaborate and inspiring visual effects and animations. The protagonist, Amanda, played by Marlee Matlin, finds herself in a fantastic Alice in Wonderland experience when her daily, uninspired life literally begins to unravel, revealing the uncertain ... more...